Dwarf Cannon is a short quest about the conflict between the dwarven outpost at the Coal truck mining site and local goblins.

For several years now, the Dwarven Black Guard have been developing the lastest[sic] in projectile warfare.

With the constant attack of goblin renegades, the dwarven troops who protect the mines need to put this secret weapon into action.

Only with your help can the true power of this cannon be harnessed!

To start the quest, you need to talk to Captain Lawgof. He can be found north-west of the Fishing Guild, near the Coal truck mining site. You can utilise the lodestone network to travel to Ardougne, and then walk north-west to Lawgof.

Captain Lawgof welcomes you and asks if you want to become an honourary member of the Black Guard, apparently the finest dwarven regiment which can only be joined by the best of the best. When you accept, he explains that he lost contact with the south watchtower, making his base oblivious to any enemy advances. Just soon after this happened, goblins attacked and overpowered his men, demolishing the defences in the process.

It is possible, although unlikely, to be attacked by a giant bat while talking to Lawgof, interrupting the conversation. If you are not strong enough to kill it, simply wait west of the cannon until Lawgof walks away from the bat.

Lawgof wants you to repair them so that the base remains strong. Agree to help him, and he will give you six replacement railings to use.

The damaged railings around the complex are bent; repair these by inspecting the appropriate sections of railing.

Just look to the bottom of the fence railings. The six bars that need fixing will not be straight lines, making them stand out.

If you fail to repair a rail, you may take 10 or 20 life points or your strength or crafting may be temporarily reduced. Whether you fail or succeed is plain random.

Fix the six broken railings and return to Captain Lawgof. He now wants you to send a message to the watchtower, to the dwarf-in-charge Gilob, saying that reinforcements will be sent as soon as the remaining goblins are defeated. Make sure you complete the conversation with Lawgof.

Head a short distance south to a ladder on a wide mound, surrounded by several wooden scaffolds; this is the watchtower. Go up two ladders to the top and you'll find some dwarf remains in the corner. Pick them up and head back to Lawgof and speak to him. The remains will not appear if you did not finish talking to Lawgof.

Lawgof identifies the remains of Gilob, and tells you that Gilob had a son, Lollk. He is missing, and Lawgof deduces that he must have been taken by the goblins to their hideout.

As the goblins keep coming from the south-east, Lawgof suggests you start there. Walk south-east, or use the Ardougne lodestone home teleport, to reach a cave entrance next to the east wall of the Fishing Guild (if you click the dungeon icon on the world map, it would incorrectly redirect to the Ardougne Sewers, ignore it).

Once inside the cave, it will fork into three passages. If you have low combat levels, be sure to avoid the north passage as it houses level 44 giant bats. Take the north-west passage to the furthest room from the entrance as shown on the map. Search the north-eastern crate against the wall to find Lollk. Talk to him and he will thank you and run off to safety.

Return to Lawgof, who says that some goblins managed to slip past into the base and sabotaged the cannon. As he does not have any proficient men, he asks you to repair it for him.

Use the toolkit that he hands you, on the nearby cannon. You will need to match up three tools with the three mechanism parts to make it work. These must be done in order: 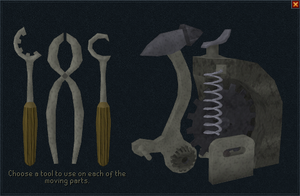 Back to Lawgof, he gives you yet another order. Now he wants you to get directions and ammunition for use of the cannon. The Weapons Development Chief of the Black Guard, Nulodion, is the dwarf you need to speak to.

Go to the Dwarven Mines outpost, north-east of Falador, and talk to Nulodion, who wanders around the outpost. Nulodion will give you an ammo mould and some instructions.

Finally, go back to Captain Lawgof and hand over the manual and mould to him. If you are interrupted during the conversation, he will take the mould but you will not finish the quest. To avoid having to make another trip back to Nulodion in case this occurs, the drop trick can be used to obtain another ammo mould. You can do this to get a free ammo mould to add to your tool belt once the quest has ended. 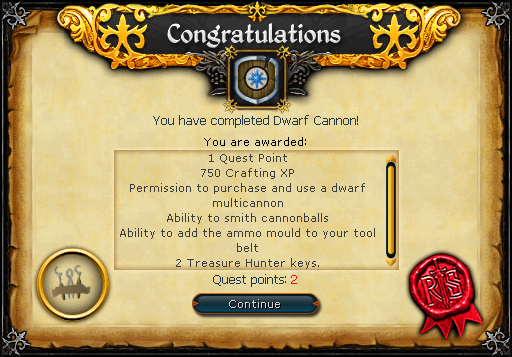 Dwarf Cannon is directly required for the following quests/miniquests: