From the RuneScape Wiki, the wiki for all things RuneScape
Jump to navigation Jump to search
This article is about the experience counter. For the item used to count, see Ticker.
"Counter" redirects here. For the rock cake stall, see Counter (Gu'tanoth). 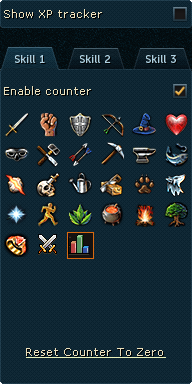 The XP tracker (formerly known as the XP Counter or XP ticker) was originally released by Jagex to members along with the Bonus XP Weekend on 12 March 2010. Exactly one month later on 12 April 2010, it was released to all players. It did not get very much attention because it was publicized in the same announcement that unveiled the highly-anticipated skill, Dungeoneering.

The settings for the XP tracker are now under the "Metrics" tab of the RuneMetrics menu. The on-screen location of the XP tracker can be moved by pressing L (or the corresponding control if it has been changed) and clicking and dragging the window with the mouse.

A player using the XP tracker.

When opened, up to three counters will be shown on screen. Each displays the amount of experience a player has received since they last reset that counter. Logging in or out does not affect the counter. Every time a player has the counter out and receives experience in one of the tracked skills, the additional experience will show up briefly, and the total in that skill will be updated correspondingly.

To reset a counter, click on the "Reset Counter to Zero" option at the bottom. This is not reversible.