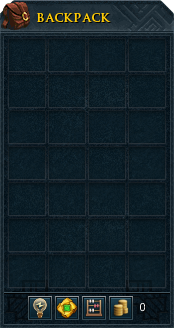 The backpack, or inventory, is the interface where the player carries items that cannot be or are not equipped. A player's backpack can hold up to 28 items, and any additional items must be stored in the player's bank or other storage areas. Some items are stackable (such as coins, runes, and arrows) which means they only take up the space of one item, no matter how many a player has.

Due to the introduction of Summoning, it is possible to have access to more items on the move by using a Beast of Burden (e.g. Pack yak). However, to use the items that have been stored with the BoB, the player must have enough free spaces in the backpack to take the items, as they cannot be used directly from the familiar's inventory. Some Make-X actions will continue to take items from BoB once initiated.

The limit of 28 items in a player's backpack is integral to the RuneScape economy. Since only 28 items can be held at once, this requires players to make trips to banks to deposit items while they are gathering and/or making items. This adds time to the process of gathering items such as logs, ores, or flax and the process of making items, such as bowstrings, bars, and bows.

If backpack was unlimited, the prices of such items could face a considerable drop because it would not take as much time to obtain large amounts of them. Runecrafting would be made easy, as players would be able to craft infinite amounts of runes in a single trip. Gathering skills, such as Fishing, Woodcutting, and Mining could be trained for infinite amounts of time without much movement, and processing skills, such as Smithing, Cooking, and Fletching would be extremely easy because infinite numbers of materials could be processed into finished items in one trip. The limitations of the backpack help stabilise the RuneScape economy.

Note that a player can transport more than the standard 28 items by dropping an item, moving somewhere, dropping a new item, going back to reclaim the first item dropped, and repeating. This is uncommon, since it takes a long time to transport just another few items. However, for a player with an backpack full of valuable items, this may prove extremely useful.

The backpack icon in the defunct Game Guide