Attack is a melee combat skill which determines the accuracy of a player's melee attacks and the types of weapons a player may wield. A higher Attack level means that players can use better weapons which possess greater damage and accuracy. As Attack is a vital skill in melee combat, increasing one's Attack level will increase one's combat level associated with melee.

Attack was one of the first skills available, introduced with the launch of RuneScape on 4 January 2001. Throughout the expansion and development of RuneScape, the concept for the skill has largely remained the same.

Nearly 2 years passed without the introduction of a higher-levelled weapon than the abyssal whip and the various Barrows weapons. On 28 August 2007, the God Wars Dungeon was introduced, featuring 4 warring factions, each protecting their respective versions of the fabled godsword. The godswords were massive two-handed weapons, offered a generous strength bonus, and required 75 Attack to wield. The reign of the godsword, however, was short lived, and on 15 October 2008, different sets of Ancient Warriors' equipment were released. The equipment was degradable, lasting for only a limited amount of time before disappearing. Although these weapons required 78 Attack to wield, they each had a "corrupt" counterpart which only required 20 Attack to equip. These corrupt versions lasted for an even shorter period of time than the normal versions. Additionally, the corrupt dragon weapons were the first new free-to-play weapons released since the introduction of rune equipment.

A player punching a training dummy.

The release of the Dungeoneering skill marked the release of chaotic weaponry, degradable weapons available for purchase via Dungeoneering tokens. Three different melee weapons were introduced, the chaotic longsword, maul, and rapier, each requiring at least level 80 Attack to equip. The release of this new skill also introduced weapons that could only be used within Daemonheim while training Dungeoneering. This included the addition of the first set of weapons which required skill mastery in Attack to wield; the primal weapons all required 99 Attack to use, with the exception of the primal maul. These weapons were among the strongest melee weapons introduced into the game with several of them setting attack and strength bonus records.

On 12 July 2011, the whip vine was introduced. This item was released as an attachment to the abyssal whip, and when combined, resulted in an abyssal vine whip. While the abyssal vine whip offered offensive bonuses which were inferior to those of the various chaotic weapons released as rewards from the Dungeoneering skill, it nevertheless required 85 Attack and 80 Slayer to wield, a higher Attack requirement than any weapon obtainable outside of Daemonheim at the time.

After six months of beta testing, the Evolution of Combat went live on 20 November 2012. This update dramatically changed the way players interacted with monsters and other players through combat. As the entire combat system had been reworked, many weapons had accuracy and damage adjustments to re-balance the combat triangle. As part of the weapon rework, several long-standing level requirements were changed. For example, adamant and rune weapons which had required levels 30 and 40 Attack were bumped to require levels 40 and 50 attack respectively. However, some weapon requirements were decreased, as seen with the abyssal vine whip, which had its level requirement reduced from level 85 to 75 Attack. In addition to weapon adjustments, the update introduced the use of abilities, various rechargeable attacks which helped increase overall damage throughput compared to standard auto-attacks.

Following the introduction of the Evolution of Combat, chaotic weapons once again held the highest Attack requirements to wield. This held true until 14 January 2013, with the release of the Kalphite King and drygore weaponry. The King dropped main- and off-hand drygore rapiers, maces, longswords, each requiring 90 Attack to equip. These weapons were significantly stronger and more accurate than chaotic weapons when they were first released. However, due to an update in late May which changed how weapon accuracy and damage are calculated, the accuracy difference between drygore and chaotic weapons was lessened.

With the release of Araxxi on 28 July 2014, the level-90 Noxious scythe tied Drygore weaponry for the position of the second strongest melee weapon outside of Daemonheim. Weapons requiring 85 Attack were the major releases in 2015: the Tetsu katana and wakizashi, dual-wielded swords obtained from the Player-owned port minigame were released on 26 January. The Lava whip, a one-handed weapon made by combining an abyssal whip with a Wyrm spike (a very rare drop from a Lava strykewyrm), was added on 16 February. Main- and off-hand ripper claws were included as drops from Ripper demons on 9 November.

The strongest melee weapons outside of Daemonheim are currently the tier 95 Ek-ZekKil, Dark Shard of Leng and Dark Sliver of Leng, being a two-handed and dual-wielded weapons respectively. Components for the Ek-ZekKil are dropped by TzKal-Zuk in hard mode, while components for the Dark Shard and Sliver can be obtained during the fight with the Arch-Glacor; while most of the components can be obtained in normal mode, the Frozen core of Leng is required to create them, so hard mode is required to create the weapons.

If using legacy combat mode, the Combat XP selection may also be made in the Combat tab.

Experience is only gained when the player slays an enemy, after which both Attack and Constitution experience are awarded dependent on the opponent's stats. It is also possible to earn experience across all melee combat skills by selecting Attack, Strength, and Defence in the experience menu. If this is chosen, the amount of experience that would have been awarded to Attack alone is evenly split among the three skills.

Attack experience may be awarded after the completion of certain quests, miniquests, tasks, random events, Distractions and Diversions, and other minigames. Additionally, experience lamps, dragonkin lamps, and books of knowledge may be used to gain Attack experience.

Hati paws, a reward from a seasonal Winter event, boosts experience to combat skills during the months following the event. The amount of bonus experience rewarded is limited, however, as the paws lose charge when providing bonus experience.

Individual pieces of sacred clay equipment obtained through the Stealing Creation minigame also provide an experience bonus to Attack and other combat skills. These items double the amount of experience received through combat when equipped. Only one piece of sacred clay armour must be worn to receive this bonus. Similar to the brawling gloves, a piece will disappear after the experience threshold of 24,450 experience is reached.

One of the main uses of the Attack skill is determining which types of weapons a player may wield. Generally, higher level weapons provide greater offensive bonuses than similar weapon types of a lower level, providing an incentive for players to train the skill.

Below is a list of some common types of weapons available through the use of the Attack skill.

Many miscellaneous weapons all over RuneScape do not fit into any particular category, such as quest and minigame rewards. All of the weapons listed are members only.

Conventional weapons used throughout Gielinor are not allowed in Daemonheim, so a separate set of metals is used during Dungeoneering. The metal types are classified by their "tiers", with tier 1 being the weakest and tier 11 being the strongest. Tiers 1 through 10 weapons may be player made or received as a drop from several monsters, but tier 11 items may only be received as a drop from boss monsters. 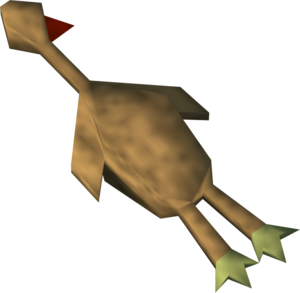 The rubber chicken, one of many fun weapons.

Various items, potions, prayers, and familiars provide temporary boosts. Below is a list of all possible boosts to Attack. Click on a category to sort.

Visible boosts are indicated in the stats interface by showing a level increase from the base level.

Invisible boosts are not indicated in the stats interface, but they are applied in combat calculations nevertheless.

The Warriors' Guild is a guild for players who have attained mastery or near mastery of melee combat skills. Entrance to the guild requires either 99 Attack, 99 Strength, or a sum of 130 in Attack and Strength. The guild features several activities which involve combat and combat experience, one of which is the cyclops room, run by Kamfreena. Here, players may obtain defenders as drops from the cyclops and cyclossi. Additionally, Attack may be trained on the animation room of the Warriors' Guild, granting 15 experience per successful hit to a dummy.

As with all skills, players who achieve level 99 in Attack may purchase a Cape of Accomplishment from the skill's master. The Attack cape and hood are sold by Ajjat in the Warriors' Guild for 99,000 coins. Players with more than 1 skill at level 99 will receive a golden trim on the sides of the cape. However, players with only 1 level 99 skill will receive an untrimmed version of the cape. The Attack cape's perk gives a 2% chance for degradable items not to degrade (this does not apply to augmented items, except those that degrade to dust).

Like all skills, there is a skilling pet obtainable from training this skill. For Attack, the pet is called Sifu.