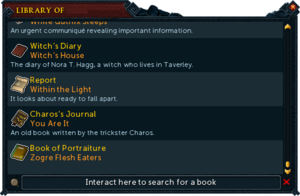 Browsing through the books in a bookcase. 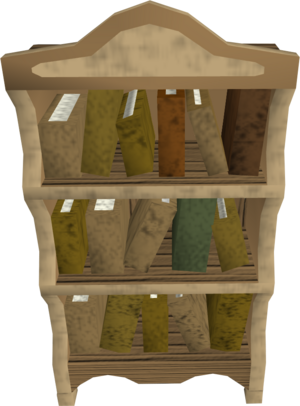 Bookcases are built in a player-owned house using the Construction skill. Bookcases can be built in the Parlour, Quest Hall, or Study of the house. Bookcases can also be found in various houses in RuneScape.

There are 3 types of bookcases which can be built in the bookcase hotspot:

All of the bookcases will contain the same books. Bookcases have the ability to save bank space, because they automatically contain most books from previously completed quests and other miscellaneous books found in RuneScape. Players do not need to fetch these books from the bank to store them in their bookcase(s).

Even if you obtain a book, a quest might have to be completed in order to find the book in your bookcase. For example, The great divide requires the completion of Mourning's End Part I to be stored.

This information has been compiled as part of the update history project. Some updates may not be included - see here for how to help out!
Retrieved from ‘https://runescape.wiki/w/Bookcase?oldid=35681302’
Categories:
Hidden category: