From the RuneScape Wiki, the wiki for all things RuneScape
Jump to navigation Jump to search
The Old School RuneScape Wiki also has an article on: osrsw:ChiselThe RuneScape Classic Wiki also has an article on: classicrsw:Chisel
For the variant encountered in Daemonheim, see Chisel (Dungeoneering).
For other uses, see Chisel (disambiguation).
Item JSON: {"edible":"no","members":"no","stackable":"no","stacksinbank":"yes","death":"always","name":"Chisel","bankable":"yes","gemw":{"name":"Chisel","limit":100},"equipable":"no","disassembly":"yes","release_date":"8 May 2001","id":"1755","release_update_post":"Runescape updated (8 May 2001)","lendable":"no","destroy":"Drop","highalch":5,"weight":0.453,"tradeable":"yes","examine":"Good for detailed crafting.","noteable":"yes"}Buy limit: 100

A chisel is a tool mainly used in the Crafting skill to cut and shape hard non-metals, mainly gems and limestone. Chisels are also used in Fletching to cut gems into bolt tips. It can be stored on the tool belt.

Chisels can also be obtained from the Crafting Guild and the tool store 1 found in the player-owned house workshop. Dororan also offers a chisel to the player during Gunnar's Ground. 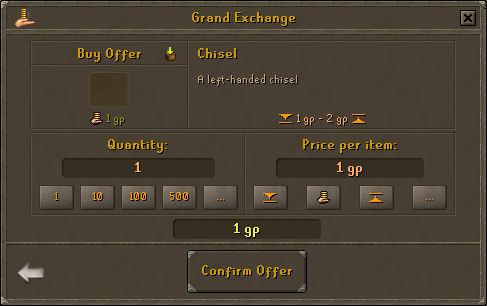