From the RuneScape Wiki, the wiki for all things RuneScape
Jump to navigation Jump to search
This article is about the minigame and event. For the emote, see Cabbage Facepunch Bonanza (emote).
Loading...
MinigameWorld event

Cabbage Facepunch Bonanza is a free-to-play minigame that takes the form of a game similar to British bulldog, which features players avoiding gorillas and other various dangers while collecting cabbages.

The minigame originally featured as the 2014 spring event, in which the god of the cabbages, Brassica Prime, and the goddess of the monkeys, Marimbo, had a contest on the remains of Saradomin's camp from the Battle of Lumbridge.[1] Holstein of The Godless also made an appearance as a third faction in the event, seeking to disrupt the contest. Players were able to side with their chosen faction in order to increase their score while they gained renown in the minigame, making it similar to a world event although much more lighthearted. After two weeks, Brassica Prime was ultimately victorious. The minigame remained accessible in its Lumbridge location for a few years after the event but was later moved to its current location in the Gamers' Grotto. 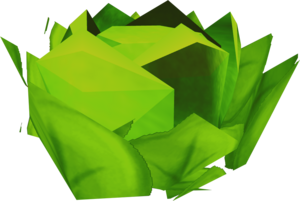 In year 1 of the Sixth Age, Saradomin and Zamorak returned to Gielinor and participated in the Battle of Lumbridge, the Mahjarrat Sliske announced his contest between the gods for the Stone of Jas, and Armadyl killed Bandos during a large battle by Falador.

The gods Brassica Prime and Marimbo saw these fights and decided that they wanted to have one too, and some time later, Marimbo plummeted out of the sky near a farm by Lumbridge, with Brassica Prime in her hand, startling a nearby farmer[2][3] Brassica Prime then claimed that the farmer's "devotion to his people had been noted", and that he would be "blessed over all other non-cabbages". Marimbo then claimed that he looked enough like one of her followers too, and she picked him up and brought him to Saradomin's old camp by the Lumbridge Crater in order to serve as a priest and quartermaster for their battle.[4] 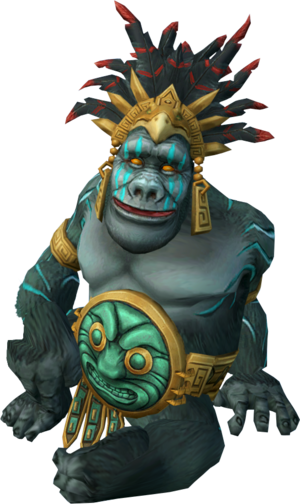 Brassica and Marimbo then chanted something, and Saradomin's old plinth sank into the ground, opening up a doorway to a dungeon that would serve as their "battleground", although their contest resembled more a game than an actual battle.[5] Marimbo merely saw the contest as a party, and Brassica as a popularity contest, although he claimed to have an ulterior motive: To settle the age old question, which is more delicious: bananas or cabbages.[6][7] They then tasked their new quartermaster with recruiting and handing out rewards to humans who wished to participate.

Kara-Meir and Holstein of The Godless soon arrived to attempt to stop this "battle between the gods", and Kara made a speech to the two gods, proclaiming that all races would soon be free of their influence.[8] The two gods merely laughed at her, calling her names, while Brassica pelted her with cabbages and Marimbo with feces.[9] Kara-Meir then left to get cleaned up, leaving Holstein behind in her stead to overlook and attempt to disrupt the contest, although Brassica Prime merely believed him to be a poor naked homeless person, and Marimbo kept flirting with him.[10][11]

After two weeks, Brassica Prime emerged victorious, with Marimbo coming in second place and the Godless in last. Brassica, Marimbo and Holstein then left Lumbridge, abandoning their camps and leaving the quartermaster behind. 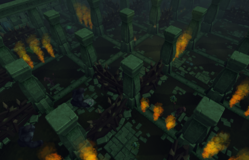 The minigame starts once enough people have entered the barrier in the middle of the area. Note that players cannot bring/wear any items or have a follower out, and prayers and Surge cannot be used within the arena. Renown can also be used to purchase rewards from the quartermaster.

In each round, players have 1 minute and 10 seconds to reach the other side of the maze in the Cabbage Facepunch Bonanza arena. They must avoid the hazards and gain as many points as they can while doing so. If all the players have reached the other side, the round's timer will be reduced to 11 seconds to save time. Any players not behind the current safe zone will be turned into gorilla guards.

The game ends when all players have been turned into gorillas, or when all 10 rounds are passed.

The arena where the minigame takes place

Players may gather cabbage trophies by mining cabbage ore veins, harvesting cabbage leaf patches and wishing-cabbage bushes, or killing monkey minions. Trophies award two points each, as well as healing players for 10% of their maximum life points. If multiple players are collecting from the same cabbage resource at the same time, all will receive a trophy and be healed.

Monkey minions work the same way, except that it will drop a trophy for anyone who assisted in killing one, and the trophy is dropped on the ground instead of being automatically given. Gorilla guards give four trophies instead, but because of their massive health pool, it is not recommended to kill them.

Players turn into a gorilla guard when they fail to reach the safe zone within the time limit, or if they die within the arena. As a gorilla, players can kill other players and set traps in gathering nodes. Each successful kill is worth 2 points for all gorilla players, each trap set is worth 2 points for the player who sets the trap, and each trap triggered is worth one point for the player who sets the trap. Note that only one trap can be set per round.

Gorilla players cannot gather cabbages, and cannot be harmed by the jets of fire and cabbage cauldrons. They are also not allowed within the safe zones in the arena. Gorillas can still obtain cabbage trophies worth 2 points that non-gorilla players forgot to pick up. When each round ends, all player gorillas are scattered throughout the arena for gameplay purposes. Gorillas also consume more run energy than a player and cannot rest.

A player transforms into a gorilla.

There are several hazards in the maze:

Scoring in the minigame is as follows: 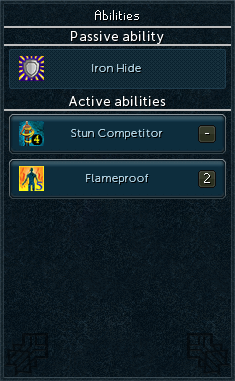 There are passive and active abilities which both players and gorillas can use to gain the upper hand on their enemies. Players can have 1 passive ability and 2 active abilities during the minigame. Abilities can be changed at will and purchased by talking to the Quartermaster.

By competing in the minigame, players score renown based on the score points at the end of the game. The first 600 renown earned each day is doubled. Free players only earn renown at 66% of the normal rate. Renown can be exchanged for rewards at the Quartermaster. These include abilities which help during the minigame, bonus experience, helpful items for slayer and farming, and some cosmetic rewards only available during the event. Players can have a maximum of 4,000 renown at a time.

You won a round!

Abilities only need to be unlocked once, and provide benefits while playing the minigame. See the Abilities section for more information.

These rewards provide useful benefits outside of the minigame.

These rewards were only available during the spring event contest between Marimbo and Brassica Prime. As the event is over, these rewards are no longer available.

The HUD showing the support level for each faction: green for Brassica Prime, gold for the Godless, red for Marimbo

The following is the faction score for Brassica Prime, The Godless, and Marimbo during the event: