From the RuneScape Wiki, the wiki for all things RuneScape
Jump to navigation Jump to search
Item JSON: {"edible":"no","disassembly":"no","stackable":"no","stacksinbank":"yes","death":"reclaimable","name":"Seedicide","bankable":"yes","gemw":false,"equipable":"yes","members":"no","id":"31188","release_date":"14 April 2014","release_update_post":"Cabbage Facepunch Bonanza","lendable":"no","destroy":"This item cannot be reclaimed. You will need to spend renown to get a replacement.","highalch":false,"weight":0.467,"lowalch":false,"tradeable":"no","examine":"While in your inventory, this will automatically destroy selected seeds for twice the XP you'd get from planting them.","noteable":"no"} 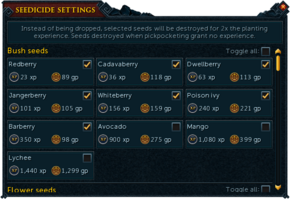 Seedicide is an item that automatically destroys selected seeds dropped by monsters in combat, in exchange for double the experience the player would normally receive from planting the seeds in a Farming patch. Pickpocketing NPCs that have seeds on their loot table does destroy seeds, but gives no farming experience for doing so. It will destroy seeds that the player does not have the level to plant, however no farming experience will be rewarded.

It can be bought from either the Quartermaster of the Cabbage Facepunch Bonanza minigame for 2,200 renown, the Farmers' Market for 10,000 beans, or from Stanley Limelight for 360 thaler.

The seedicide can be upgraded with the "seedicide collector upgrade" at the Farmer's Market for 25,000 beans. The upgraded seedicide can be set to automatically pick up all seeds which are not destroyed, similar to the effect of the upgraded bonecrusher. The seedicide may also be placed on the tool belt after buying the ability to do so from any Slayer master for 500 Slayer points.

Before the seedicide collector upgrade will start picking up seeds, players need to toggle the auto-pickup option at the bottom of the seedicide settings.

This information has been compiled as part of the update history project. Some updates may not be included - see here for how to help out!
Retrieved from ‘https://runescape.wiki/w/Seedicide?oldid=35717102’
Categories:
Hidden categories: