A Fairy Tale I - Growing Pains

A Fairy Tale I - Growing Pains is a quest following Lost City, being set in Zanaris, the fairies' world and RuneScape's moon. It revolves around the Fairy Queen's encounter with a dangerous tanglefoot and her replacement, the Fairy Godfather. 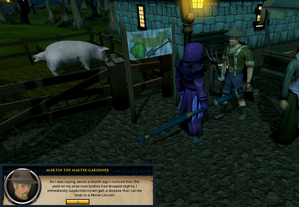 Talking to Martin the Master Gardener in Draynor Village.

To start the quest you must first talk to Martin the Master Gardener in the Draynor village square. He tells you about the rampant drop in crop yield all over RuneScape and wants your help to locate the source of this problem. You need to talk to five members of the Group of Advanced Gardeners (G. A. G.), besides Martin (if you are not sure how many gardeners you have talked to, open up the quest guide and it will tell you if you have spoken to enough farmers). You can choose any of the gardeners near the farming patches (allotments, bushes, hops, trees, etc.) around RuneScape, except Head Farmer Jones at Taverley.

If you have a tree planted, you MAY need to clear it before the topic related to the quest will show up.

The easiest gardeners to reach are the following:

All of them say the same thing: they've been having trouble with poor crops. They all have different explanations of what they think is wrong, including lack of rain, insects, pesky adventurers and erratic seasons. However, the fifth one you ask will suggest the fairies are the common root of such reasons. If you ask more than five members, the additional ones will be unresponsive to the issue of crop failure.

Go back to Draynor and talk to Martin again. After telling him about the different ideas, go back to the Lumbridge Swamps and walk into the shack that was used during Lost City with your dramen staff (or lunar staff) to go to Zanaris.

Head to the Fairy Queen's chamber. It's just south of where you enter the city, in the room with the slayer master. However, something's wrong. The queen herself is missing, and someone by the name of Fairy Godfather is there instead. When you speak to him, he will tell you that the queen protects the fairies from creatures known as Tanglefoot, who attack the city every once in a while from the shady grove near the Cosmic Altar. 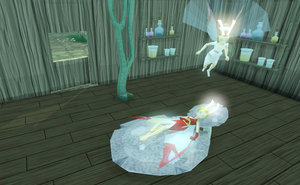 Unfortunately, in her last encounter with a Tanglefoot, the queen has fallen to some sort of illness and is under the care of Fairy Nuff.

To find the queen, head west to the bank and then north to go to her house. Talk to Fairy Nuff, and she will tell you the details of the queen's illness and give you a symptoms list to take to a wizard named Zandar Horfyre, who used to work on otherworldly beings in Zanaris.

Go to Falador and head west into the city, and climb across the crumbling portion of the wall to reach the Dark Wizards' Tower. You can also teleport to Port Sarim and head north-west, or to the Clan Camp and head a short distance north-west. When you arrive at the tower, head up to the top floor, and talk to Zandar.

If your combat level is low, you will be attacked by the level 22, 35, or 37 Dark wizards in the same room as Zandar. If this happens after handing over the list of symptoms to Zandar and not finishing the conversation, you will have to return to Fairy Nuff to get another one.

Zandar explains to you that the life essence or the soul of fairies is purely magic. He tells you that a large part of the queen's life essence has been drained, which can only be done by a Tanglefoot or be done voluntarily. He'll take the symptom list and then suggest you talk to Malignius Mortifer, the only other known killer of a Tanglefoot.

Where the grave is located 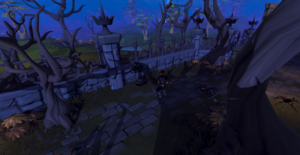 Digging up the Draynor skull

Malignius can be found south of Falador, or north from the Port Sarim lodestone, along with four elemental wizards. Talk to him, and he'll tell you he could help but he wants something from you first – a skull from Draynor Manor. No other skull will work, as Malignius will not be fooled.

Go to the manor and around to the back. Click on the gravestone to dig there to find the skull, and head back to Malignius and give it to him. The toolbelt works, but if you need a spade, there is one on the east side of the manor.

Malignius tells you that he had indeed killed a Tanglefoot a long time back using a pair of magic secateurs. To obtain them for yourself, Malignius will tell you to go ask the Nature Spirit to perform the spell 'Phasma Phasmatis Natura' on an ordinary pair of secateurs, along with three or four specific items. These are different for everyone, so you must get the items assigned to you.

You can find which items are needed by looking in your quest list. The requested items may include items from the list below.

Warning: Ghasts in Mort Myre swamp may rot any food you carry. If one of your required items is edible seaweed, jangerberries, king worms or lime, there is a chance that you may lose it; pack druid pouches or multiple food items to be safe. You can also avoid most of the ghasts by walking along the walls of Castle Drakan and into Mort'ton through its eastern entrance, from where you can safely get to the Nature Spirit.

If you do not have the required Herblore level to clean your herb, you can speak to Zahur in Nardah, who charges 200 coins for cleaning one herb. An alternative to this is to buy its clean version on the Grand Exchange.

When you are finally ready, grab the required items, your secateurs, and go to the Mort Myre Swamp. Make sure to have the secateurs in your inventory and not in your tool belt. Walk south until you find the Grotto Tree on an island – marked by a summoning obelisk icon – and talk to the Nature Spirit. He will bless your secateurs, at which point they will start to glow green. It is a great idea to pray at the nature altar, as it boosts your prayer by 20 points and also rewards you with the 'Fortified Spirit' achievement.

The Tanglefoot can only be harmed with the magic secateurs. The higher your Farming level, the greater you will hit.

Head back to the Lumbridge Swamp and enter the shed with your dramen/lunar staff equipped. The magic secateurs are a one-handed weapon, so a shield or an off-hand weapon can be used, as long as the Magic secateurs are wielded, your off-hand weapon WILL do damage. Head through the corridor south from the field of wheat to the mysterious ruins of the cosmic altar. To the west of the altar is an alcove with a shady grove. Attempt to enter and the gatekeeper will let you pass, saying that he is under orders to let you through. 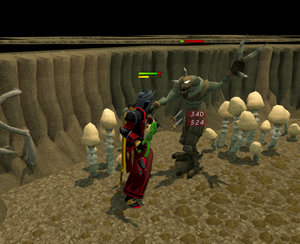 The battle with the tanglefoot!

Inside will be a bunch of baby tanglefootii, and at the end of the tunnel will be a large, level 68 Tanglefoot.

Wield your magic secateurs and approach it. Appropriate food and melee armour is recommended for lower-levelled players; shields are also recommended, as the defensive abilities Reflect and Revenge can dramatically increase your damage output. Since Tanglefoot uses ranged attacks, it is suggested to use Protect from Missiles.

After you have defeated the Tanglefoot, grab the Queen's secateurs that it drops. If you have a full inventory when you kill it or if you forget to pick up the secateurs and you leave, you can go back to the tunnel and receive them at the start of the tunnel.

Head back to the Fairy Godfather, and give them to him to finish the quest. 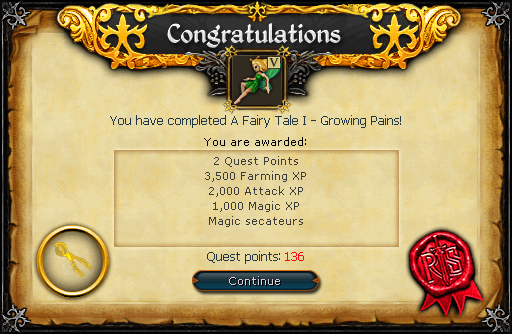 A Fairy Tale I - Growing Pains is directly required for the following quests/miniquests: