Entrana is a members-only island that lies south of Catherby. This location can be accessed by:

Players cannot bring weapons or armour to Entrana as ordered by Saradomin and enforced by his monks. However, players can make equipment on the island, such as making a bow by using a Knife on any type of Logs and then stringing the bow. Players are also allowed to bring ammunition into Entrana.

Entrana can be an efficient area to create glass, as all the supplies are found on the island.

Eons ago after the Elder Gods shaped Gielinor, the Elder Gods had the TokHaar create a statue known as the Sleeper whose task was to warn mortals about the use of the Elder Artefacts. When the Elder Gods went to sleep the Elder God Bik apparently chose Entrana as her resting place. It is hinted that she may even be the island itself.

Many years passed until Guthix started to populate the world. Eventually, Saradomin took notice of Gielinor and decided to set foot on it. Descending on Entrana Saradomin encountered the Sleeper who gave him the warning. Saradomin didn't listen to it and submerged it in the ocean by the northwest coast silencing it.

Not much is known of Entrana's history after Saradomin arrived except that it was blessed and protected by him. During the God Wars Zamorak sent a force led by the demon Zebub to Entrana. The forces were fended off by Saradomin's followers under the leadership of Commander Zilyana.

Entrana became known as Saradomin's arrival spot and is therefore considered holy by his followers. An order of monks established a church in his honour. Following Saradomin's return and victory over Zamorak at the Battle of Lumbridge, more pilgrims choose to visit the island. [1]

Melee items: Magic secateurs cannot be carried onto the island, but can be stored with the tool leprechaun who stands next to the hops patch, west of the arrival dock. Cured yak-hides can be brought to the island to make yak-hide armour, and silver sickles can be made from silver bars by using the furnace.

Ranged items: Many Crafting and Fletching items are allowed on the island; players may use this loophole to get around the ban on weapons and armour. Leather, snakeskin, dragon leather, needles, thread, steel studs, dart tips and feathers are allowed. Additionally unstrung bows, bowstring, and arrows are permitted. High Crafting and Fletching levels are required to make some of this equipment on the island.

After completion of the Legends' Quest, 25 blessed gold bowls filled with sacred water can be brought with the binding book. Vials can be bought at the herblore shop, enchanted, and filled from the bowls, then wielded as holy water. Prayer can be restored at the altar. Thus 250 vials for combat with the greater demons in the Entrana Dungeon may be created for every trip.

Magic items: It is possible to bring imphide, spider silk, or batwing and thread to craft wands and books/orbs, as well as magic armour (if necessary). All runes are permitted on Entrana as well.

There are also several monsters found under Entrana. See the Entrana Dungeon article for more details.

A playable organ can also be found on the second floor of the church. 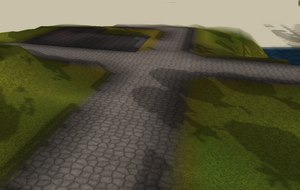 Only land and shadows remain