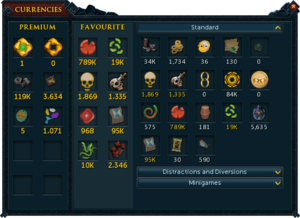 The currency pouch is an interface that displays many different types of currencies, notably including bonds and oddments and rare item tokens from Treasure Hunter. It can be accessed anywhere from the inventory interface. Only current members can see currencies relating to members' content.

It was originally released on 28 July 2014 as the bond pouch until 4 April 2016 when Treasure Hunter items were added. Finally, on 26 September 2016, it was expanded from microtransaction items to its current format. Before this, many currencies (such as Tokkul) took up slots in the inventory or bank, while others, such as Dungeoneering tokens, would only be visible in certain interfaces.

To access the currency pouch in the Legacy Mode interface, right-click the gold icon below the minimap, click "Currency Pouch", and then click the golden gear icon at the bottom right of the inventory.

The following can be stored in the pouch:

The currency pouch has a total of nine slots available for the following, with bond and bond (untradeable) taking up two slots even if they aren't stored in the pouch. The full currencies interface only shows the first eight of these slots at a time.

This information has been compiled as part of the update history project. Some updates may not be included - see here for how to help out!
Retrieved from ‘https://runescape.wiki/w/Currency_pouch?oldid=35720633’
Categories:
Hidden category: