From the RuneScape Wiki, the wiki for all things RuneScape
Jump to navigation Jump to search
This article is about the interface feature. For other uses, see Notes (disambiguation). 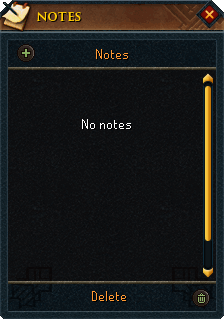 The Notes feature was released with the Mobilising Armies update of 8 July 2009. It is a part of the interface that allows players to add up to 30 notes in plain text, with a maximum of 50 characters each, for a total of 1500 characters. Players can add a note by pressing the button at the top-left of the interface, which is marked with a green 'plus' (+) symbol, and then typing on the keyboard.

Players can customise an individual note by right-clicking it. This allows them to change the colour of the note's text to any of four different colours — red, green, amber, white — with white being the default. They can also edit the text of any note, using the Caret to select certain parts of the note to go back to.

Players can delete any note by selecting it and then pressing the "Delete" bar, or delete all notes by right-clicking the Delete bar and selecting "Delete all".

The Notes feature is useful for keeping track of prices or writing down lists of things to buy. It could also be used in quests that require you to remember a word or phrase.

The code for player notes was optimised on 9 November 2009.

Players who are under 13 years old cannot use this feature. This feature can also be used on Quick Chat worlds.[1]

Typing any key or specific phrases will result in the note changing to a popular cultural reference or meme.

Mod Hope has tentatively confirmed there are more to be found.