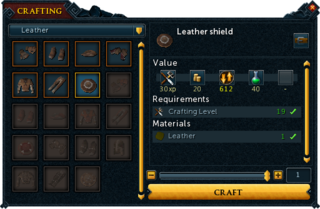 Make-X is a function interface that facilitates the player in creating items.

Right-clicking the number will allow the player to type in the number of items they wish to make from their inventory. The spacebar can be pressed to begin without clicking the interface.

The process will stop when the player produces the specified number of items unless they select "cancel" or click on the mini-map/anywhere else in the game window. Production also stops if the player is attacked.

These are the skills that use the make interface and the respective tabs.

The following are not related to each other, and are all separate.

These appear to all be separate from each other: