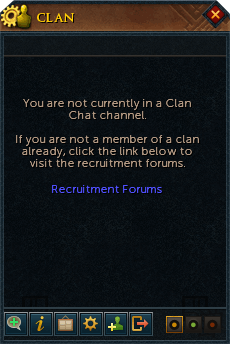 The Clan Chat (abbreviated as CC) was added to the game along with the Clan Camp on 12 April 2011. Similar in functionality to the Friends Chat, it provides a channel for communication between all members of a registered clan who are online at the time. Online clan members join the Clan Chat automatically upon logging in, and are always present during gameplay or while in the lobby. Clan Chats are available to both free players and members.

Until the Clan Camp update, what is currently called the Friends Chat was known as the Clan Chat.

A scrolling list of Clan Members and visiting players (if allowed by Clan Officials) will be displayed in the clan chat interface. Next to each Clan Member is an icon displaying their rank in clan, while visitors do not display any rank in this interface. Also listed is the world players are on. Players in the same world as you will show their world number in Green. All other worlds and Lobby will appear in yellow.

The "Check amount of gathered resource by a member" is available to Clan members who have a rank with permission to do so, and can only be used when on the same world as the member they want to check. This will display to the administrative member the amount of resource gathered for the clan citadel since the last tick by this member. 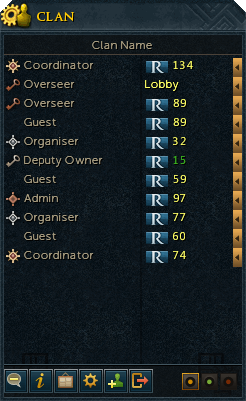 The clan chat interface when a player is in a clan

To invite new players to a clan, a player who has a rank that has the ability to recruit players (which is given in the clan permissions interface) must click the 'Invite'

button which sits along the bottom of the clan chat interface, and then click on the player they wish to add to the clan. A player may also invite someone to a clan by using a vexillum on the player they wish to invite. That player will receive a message in the chat box, asking them to join your clan, which they can click on to accept or refuse. If they accept, they will then be placed in the clan as a recruit (which can be later changed by a clan member ranked admin or above).

Players send single messages to the Clan Chat channel by typing two slashes (//) and then their message. If they want to send multiple messages to clan chat, they can swap their chat mode to clan by clicking the 'clan' button beneath the chat box, or typing '/c' then enter. When in the default chat mode of clan, all messages typed without any slashes prefixing them will always be sent to the clan chat channel. A message sent to the channel will appear for every online clan member, regardless of their current world, or if they are in the lobby. Because of this, the Clan Chat system is a useful way to reach all online members at once for announcements, or to hold discussions or meetings

Individual players can filter the messages received from the Clan Chat by toggling the Clan option at the bottom-left of the screen, even setting it to Off if they do not wish to take part in discussions. They can also leave the clan chat by pressing the 'leave Clan Chat channel' button on the bottom of the clan chat interface to be dropped out of the chat temporarily. 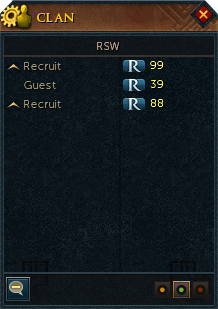 Players who are not official members of a clan can join its Clan Chat as a guest if they know the clan's name and if the clan's officials allow guests to join the chat. They can do so by opening the clan chat interface, then clicking on the green

Rather than the usual two slashes, players preface messages with three slashes (///) in order to send them to a guest Clan Chat. Players may also type '/g' then enter to swap to guest chat mode, which will send any non-prefaced messages to guest clan chat by default. Depending on the settings of the Clan Chat, guests may be able to enter the channel and read messages, but unable to send any of their own. If an administrator invites a non-clan member to join the Clan Chat, they will be ranked as Recruit; otherwise, guest players are not ranked.

Guests can be used to infiltrate clan chat groups if the clan allows guests, as the guest will have access to all of the clan's active members and which worlds they're on, which can be used to track them down across worlds, which is most common with Wilderness activities. To counter this, players of a clan can leave the clan channel, ranks can kick/ban guests or close the channel to all guests. Players can decrease the chances of getting guest-tracked by setting their private to friends or nobody, making themselves unexaminable and hiding their RuneMetrics Adventurer's Log so that only friends/themselves can see it. 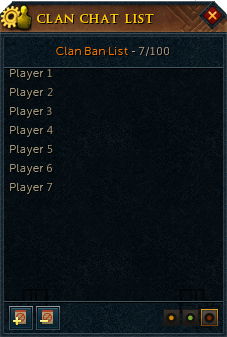 Guest members of a clan chat can be kicked by anyone with the "Who can kick from the chat" permission (as set in the clan settings interface). The kicks can be performed by either clicking the arrow beside the guest's name in the clan chat interface and then clicking the 'temporary kick/ban' button or right clicking any chat message sent by the guest. A message will then be printed automatically by the kicking player stating the player they are attempting to kick. Kicks will then last for an hour, unless the clan chat is emptied (which is more difficult to do with the clan chat since players cannot kick clan members to help empty the channel).

Guests can be permanently banned from a clan chat by adding their name to the Clan ban list, which is the red tab beside the visited clan chat. Players can only be added to this list by clan members ranked admin or above. Adding someone's name to this list makes them unable to join as a guest until their name is removed from the list. This list is visible to all members of the clan chat and has a capacity of 100 players.

Players banned from guest clan chat are also banned from the clan citadel. They are also unable to be recruited into the clan.

It is possible to leave a clan chat without leaving the clan entirely by clicking the 'leave Clan Chat channel' button in the bottom-left corner of the clan chat interface. This will drop the player out of the clan chat channel until they press the same button again, or until they log out into the lobby. To leave the clan permanently, players must either be kicked from the clan by a clan member ranked admin or above through the clan settings interface, or they can click the 'leave clan' button along the bottom of the clan chat interface. This is Bank PIN protected. Note that if the player leaves the clan chat without leaving the clan, they will still have their online status shown in the 'clanmates' tab of the clan's page in clan home (which will be shown to either everyone, or just other clan members depending on their private chat settings). If a player leaves a clan they can immediately join another clan, however they will have to wait 7 days before using the clan citadel if they have used a citadel in the last 7 days.

Clan officials are able to change the following settings of the Clan Chat. All options are set to "Recruit+" by default; clan members with Administrator ranking and above can adjust the settings[source needed].