A sextant is an essential item for solving coordinate clues on treasure trails. A sextant can be obtained from Murphy, who can be found wandering around on the pier by the bank deposit box in the north-eastern region of Port Khazard. It can only be obtained after talking to the Observatory professor who may be at the Observatory or the nearby Observatory reception building to the north-east, depending upon whether the player has completed the Observatory Quest. After learning about the sextant from the professor and having a coordinate clue in the inventory, Murphy will give a sextant.

After an update, all of the treasure trails coordinate items are found on the tool belt. Players still need to talk to the Observatory professor about coordinate clues.

Brother Kojo in the Clock Tower can then give the player a watch. With a sextant, watch, chart, and the coordinate clue scroll in their inventory, the player may dig up a casket or scroll box. The sextant, watch, and chart can be added to and used from the tool belt. To use a sextant in the tool belt, right-click on a coordinate clue scroll and choose the sextant option. If any of the items are missing, the player will not be able to dig up the casket/box at the proper spot.

After first obtaining a sextant from Murphy, the player may thereafter make sextants. A sextant can be made by having one steel bar and clicking on a crafting table 4 in the workshop of a player's house.

Operating the sextant is a fairly simple task. The idea is to put the horizon and the sun in the middle of the screen. 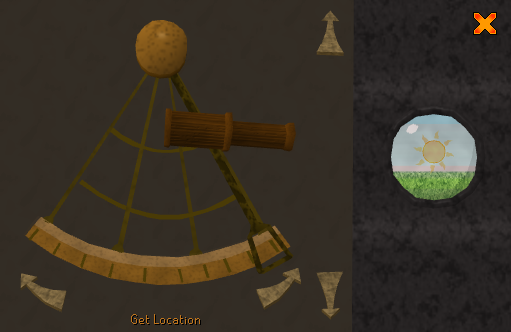 First use the vertical 'arrow buttons' on the right to put the horizon in the centre of the viewer on the right hand side. Then use the horizontal arrow buttons to move the sun onto the horizon in the middle of the screen. Clicking 'get location' will give the coordinates of the player's position. This consists of two numbers; the first indicates how far the player is North or South of the Observatory, in degrees and minutes, and the second how far East or West. One degree is 60 minutes, and each game square is approximately 1.875 minutes.

Sextants will often need to be used quickly in Wilderness locations, as monster attacks can interrupt plotting.