From the RuneScape Wiki, the wiki for all things RuneScape
Jump to navigation Jump to search
The Old School RuneScape Wiki also has an article on: osrsw:Tackle box

A tackle box is a reward from Fish Flingers Distractions and Diversions. It comes in 5 different levels. Fishing equipment, fishing bait, and one kind of fish at a time can be stored in it. It also enables players to send a certain number of raw fish back to their bank every day, and it can be operated to discover the next competition time for Fish Flingers. If destroyed, players may claim another one from the fisherman, free of charge. All items stored in the tackle box will still be intact.

There are five tackle boxes, the higher level ones costing more, but having greater benefits. One must have the previous tackle box before claiming the next one. 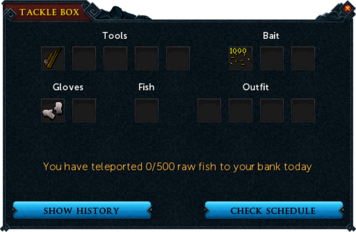 Example inventory of a tacklebox.

The following tools and items can all be stored in the tackle boxes, but some tools can also be stored on a player's tool belt.