From the RuneScape Wiki, the wiki for all things RuneScape
(Redirected from Mattocks)
Jump to: navigation, search
[view] • [talk]

Mattocks are tools used to excavate materials, artefacts, and soil in the Archaeology skill. Mattocks can be held in the inventory, stored in the tool belt, or wielded. There are no plus versions of mattocks. The golden mattock and its override are purely cosmetic and cannot be used in Archaeology.

Skillchompas can be used as alternatives to mattocks and have effectiveness equivalent to their corresponding tier.

A player's Archaeology level determines the type of mattock they can excavate with.

Every mattock has two stats: precision and focus.

Mattock precision upgrades permanently increase the precision of any mattock by +2 and are available at the Archaeology Guild Shop starting at the Assistant qualification. These upgrades are non-repeatable, and apply to any mattock used by the player. This increase is reflected in the mattock's tool tip.

Focus is a stat that determines the rate at which materials are found while performing an excavation (at either an excavation hotspot or material cache). This rate is independent of the excavation progress.

As a general rule, the better the mattock, the more effective it is as an Archaeology tool. It is highly recommended to use the best possible mattock for the player's current Archaeology level. 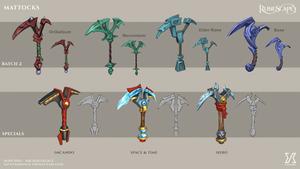 Dragon, crystal, imcando, Time and Space, and Guildmaster Tony's mattocks can be augmented using an augmentor. This requires level 22 Invention and having researched the augmented mattock blueprint. The following tool gizmo and ancient tool gizmo perks work when training Archaeology:[1]