From the RuneScape Wiki, the wiki for all things RuneScape
Jump to navigation Jump to search
The Old School RuneScape Wiki also has an article on: osrsw:Items Kept on Death 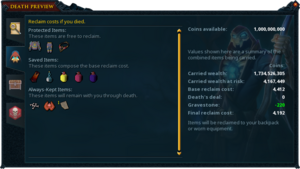 Items Kept on Death is a menu accessed from the Worn Equipment button on the Interface that shows which items players keep when they die. Generally, only the three most valuable items are kept. These three items are shown in this menu. A maximum of five items can be protected in total, despite it being possible to have multiple ways to protect extra items. This can be reached by using a combination of Protect Item prayer, a Portent of item protection or the Hoarding perk. However, if skulled then no items will be protected, or up to three if skulled with Protect Item active, Powder of item protection, and having recently eaten a fury shark. Furthermore there are some "safe" situations in which all items are protected. Hardcore Ironman players can also check how many lives they have left by clicking on the 'Death information' button in the lower right.

Since the update on 19 April 2011, many stackable items, such as coins, are always kept, including most basic items, such as low level armour, runes, seeds, food, and quest and untradeable items. Death mechanics were updated again on 26 May 2015.

Upon death, players are taken to Death's Office and have the option to reclaim items from Death himself (or Frank during Missing, Presumed Death) for a coin fee, destroy the items, or attempt to retrieve items at their gravestone within a small period of time for free. If players die in the Wilderness, they do not respawn at Death's Office; the player just spawns east of the Edgeville lodestone, losing all but the three to five most valuable items, depending on active effects.

Upon dying in the Wilderness, be it to player or monster, players will lose all of their items, except their three most valuable items. A maximum of five items can be saved by using the protect items prayer and a portent/sign of item protection unless on a high risk server. However, players who are skulled will lose all items by default. 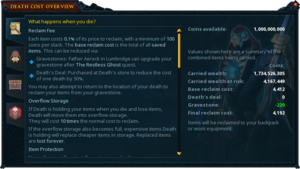 Death Cost Overview provides a breakdown of how the players reclaim fee is calculated. It also explains how overflow storage works, how to protect additional items on death, and how death works in dangerous PvP areas. 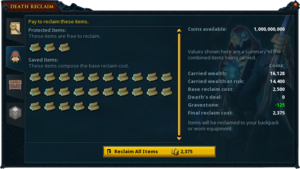 Death Preview shows which items are lost on death and what the final reclaim cost would be. Items cannot be reclaimed here, instead, if a player has died they can reclaim their items by bringing up the Death Reclaim interface by right-clicking "Reclaim items" on Death at Death's Office.

There are three categories for items: 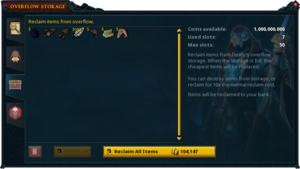 Overflow Storage contains items held if the player dies a second time without reclaiming their saved items. Reclaiming these items costs 10 times the normal reclaim cost and the items are sent to the players bank. A maximum of 50 items may be stored here, if additional items are added to the storage the cheapest items are permanently deleted and cannot be reclaimed. 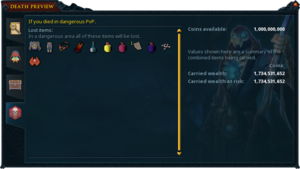 Death Preview (Dangerous PvP) shows which items are lost on death if the player dies in a dangerous PvP area. Dying in dangerous PvP will not send the player to Death's Office, instead they will respawn at the nearest spawn hub with only their protected items (if any). There are two categories for items in PvP:

Every item follows one of several behaviours when a player dies with it.

Reclaimable items are lost when dying in a dangerous area. A maximum of 5 items can be protected to be reclaimed for free. The rest of the items will require payment to retrieve. They may also be sacrificed to help offset the total reclaim cost. 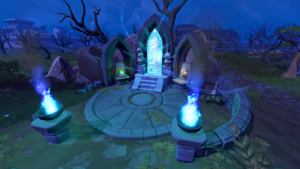 Reclaiming items after dying from Death will present a nominal return fee depending on several factors. Values are split between saved value, total cost to save and sacrificed item value. Saved item value and sacrificed item value are generally small percentages of the total value of a given item which is reduced the more the item is worth. However some items have fixed items values like the Dragon Rider amulet and Asylum surgeon ring where they have no sacrifice value and cost the same to replace through Death or their original source.

Items worth up to 10,000 coins cost 15% to save and have a 60% sacrifice value. Items worth more than 10,000 coins have a decreasing percentage to save ending at 0.5% at an item worth upwards of 10,000,000 coins. All costs are rounded down. The minimum value reclaim can be is 1 coin. Sacrifice is always four times the cost of reclaim's final value.

Sacrificing items can reduce the cost of reclaiming items and several gravestones can further reduce the cost to save by 1% and up to 5%. The visible gravestone will not affect the deduction provided by the base gravestone purchased. Any items that would generally have degraded upon death will not do so if reclaimed from Death or Frank. If players choose to instead to return to their gravestones, any items that would degrade upon death will do so. Some items have a custom sacrifice value, usually 0, which does not follow the above formula.

If players have been disconnected due to server side issues, they will be able to reclaim their items should they die at no cost.

Some items are never kept on death, and will immediately be lost. These items cannot be protected in any way, even if they are the only item the player is carrying.

Items that are always kept outside the Wilderness[edit | edit source]

Certain items are always kept when death happens outside the Wilderness. These items are free to reclaim, meaning they add no additional cost; however, reclaiming them still requires paying for any lost reclaimable items.

Items that only exist in safe death areas[edit | edit source]

Some items can never be obtained in an area where dangerous deaths will happen. These items are always kept, as are any other items the player is holding, regardless of standard behaviour.

Some items such as minigame or crucial boss fight items will be dropped on death and immediately visible to other players.