From the RuneScape Wiki, the wiki for all things RuneScape
Jump to navigation Jump to search
The Old School RuneScape Wiki also has an article on: osrsw:Quest List
This article is about the game interface panel. For a list of Quests, see List of quests.

Quest List sorted by membership status required to do the quest.

Quest List sorted by difficulty level of the quest.

The Quest List, also called the Quest Journal, is a panel of the game interface. This journal shows the complete list of quests. Since 19 September 2012, the list was located in the Noticeboard, but it has since been moved to the Adventures tab.

On 25 February 2009, the Quest List was upgraded with the sorting feature, and on 26 November 2013, options were added. The ability to sort the list by length was added on 4 December 2017. On 11 February 2019, more sorting options were added, including the ability to sort by timeline, combat difficulty, starting area, release date, or quest series. The sorting feature enables members to sort quests based on:

Groups quests by their starting area in rough order of increasing difficulty.

The list is coloured-coded based on the progress made in each quest:

The list is sorted based on the difficulty of each quest:

Groups quests based on the combat level of enemies encountered during the quest. This does *not* necessarily mean recommended player combat level and actual difficulty of the quest.

The list is sorted based on the estimated time taken to finish the quest. Within each category, quests are listed in alphabetical order.

Groups quests by their year of release and sorts them by their exact release date.

This list groups quests by the age they take place in. Quests within each category are sorted by their release date.

Quests are listed with rough chronology and their difficulty in mind and divided into several groups representing player character's path in the world.

Quests are grouped by quest series they belong to in rough chronological order. Due to the technical limitations quests are assigned to only one series even if they are considered to belong to more than one.

Quest list features three filters that allow to hide quests that are not relevant for the player at certain stage. At the top of the quest list are three checkboxes, "Hide done", "Recommended" and "Can complete".

Previously, instead of "Recommended" and "Can complete", Quest List featured filters called "Filter 1", "Filter 2". Clicking on "Filter 1" allowed players to view all quests which were not otherwise filtered, or only view the recommended quests for their levels. By clicking on "Filter 2", the quests that players did not have the requirements to complete were sorted out of the list.

When filtering feature was first introduced, players were unaware of the changes made to the Quest List, and noticed that some quests were missing from their list. This could be fixed by unchecking the filtering options, as the default setting was to filter quests that players were unable to start. This also happened with the release of Runescape Mobile. This was because some people were limited to Mobile for various reasons, Osrs mobile was released first, and the changes were not introduced there.

In the Quest interface (Overview or Quest Journal), the player may choose to make the current quest the "active quest". This means that, as far as possible, the minimap and world map will be highlighted in the next locations that the quest requires. If the player has not yet started the quest that has been activated, the map highlight will indicate the quest starting location.

At the bottom of the journal, the number of quest points obtained out of the total amount possible is displayed. 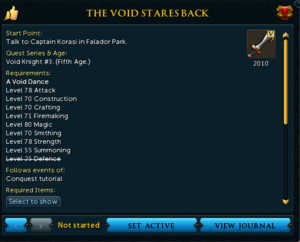 Quest Overview screen for The Void Stares Back.

Clicking on a quest name shows a Quest Overview (for quests that haven't been started) or quest journal (for quests in progress or finished). Depending of quest progress the quest journal contains a list of requirements and information about starting the quest or a summary of what the player has already done in the quest and how to progress further with list of rewards upon completion. Overview includes the following informations at all times:

After completing certain quests, the Quest journal will give new information.

This information has been compiled as part of the update history project. Some updates may not be included - see here for how to help out!
Retrieved from ‘https://runescape.wiki/w/Quest_List?oldid=35682464’
Category:
Hidden category: