From the RuneScape Wiki, the wiki for all things RuneScape
Jump to navigation Jump to search
The Old School RuneScape Wiki also has an article on: osrsw:Steel key ring
Item JSON: {"edible":"no","disassembly":"no","stackable":"no","stacksinbank":"yes","death":"always","name":"Steel key ring","bankable":"yes","gemw":false,"equipable":"no","members":"yes","id":"4446","release_date":"28 February 2005","restriction":"surface","release_update_post":"One Small Favour","lendable":"no","destroy":"You can get another key ring from Yanni Salika in Shilo Village.","highalch":false,"weight":0.001,"lowalch":false,"tradeable":"no","examine":"I can store my keys here.","noteable":"no"} 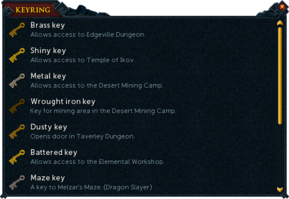 The interface that players can use to check what keys are on the key ring.

A steel key ring is one of the rewards from the One Small Favour quest. It is useful because a number of keys can be placed onto it without taking extra inventory spaces. It is not required to take keys off of the key ring to unlock doors with them.

Following an update on 24 September 2018, the steel key ring is automatically added to the tool belt upon completion of the quest.

To view the keys that are stored on the steel key ring, one must click on the Settings gear icon in the top right corner of the tool belt interface, then choose "Key Ring". Alternatively, click the key ring in the tool belt itself and click on the ring's picture to the left of its description. 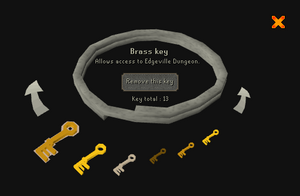