Between a Rock... is a quest about helping the old dwarf Dondakan, who is trying to access a legendary gold mine south of Keldagrim.

Head to the Keldagrim south-west mine (if you are entering through the cave entrance, cross the river by speaking to the ferryman) and speak to Dondakan the dwarf; when asked why he is shooting cannonballs at a wall, Dondakan explains that the wall is in fact a "special" rock by the fact that it is impenetrable. After having no success with a pickaxe and being abandoned by his colleagues, he requests your help in analysing and harnessing this enigma.

Location of the dwarven engineer.

Accept, and he'll suggest entering the dwarf city and finding someone who knows their way around rocks or, if that fails, speaking to the librarian. If you haven't yet completed The Giant Dwarf quest, you will need to talk to the dwarven boatman to visit Keldagrim for the first time; the boatman is at the entrance upon first crossing the water.

In West Keldagrim, go inside the consortium, the largest building there. Directly east of the entrance, there'll be a Dwarven Engineer. Speak to him and he'll tell you about Rolad, a renowned scholar who used to work with Dondakan on the rock. He eventually left, saying he wanted to travel the world and learn by experiences and was last heard being with the Black Guard at Ice Mountain. 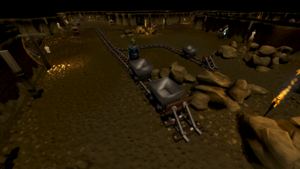 One of the possible carts with the missing pages.

Teleport to the Falador lodestone and run north-east or to the Edgeville one and head south-west. Rolad is in the north-eastern building near the entrance to the dwarven mine. Mention Dondakan and his impervious rock, and he'll suddenly remember procuring a book which had details about the same rock and how it got placed in the Keldagrim mines. He had torn out the relevant pages to study them but has unfortunately misplaced the bunch, probably in the nearby underground mines.

Offer to help in retrieving the pages and climb down the ladder to enter the dwarven mine. Note that the pages may require multiple attempts to be obtained.

Once you gather all 3 pages, they will automatically combine into pages. Return to Rolad with the pages, and he will give you a book on dwarven lore. Read the book to learn about the history of the solid rock and how a certain Arzinian being from Bordanzan was trapped inside a mine containing "yellow stones" by a few elder dwarves' efforts. The mine collapsed into itself and formed into a single, extremely hard stone form, holding the entity inside it. 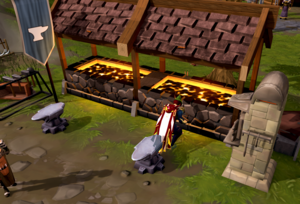 Smelting a golden cannonball in Burthorpe

Head back to Dondakan and inform him about the trapped spirit and the gold. He tells you that the other metals like adamantite, runite, and granite have failed to make a dent on the rock, to which you suggest using a "yellow material". Show him a gold ore or gold bar on him and he'll ask you to create a gold cannon ball out of it. 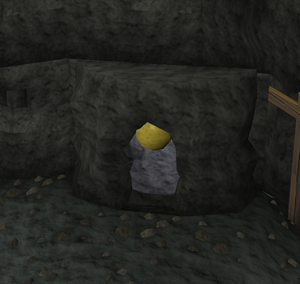 The gold ball went right through!

Ensure that you have an ammo mould either on you or in your toolbelt, otherwise the option to craft the golden cannonball will not appear. You can either walk to the furnace in the consortium and craft your golden cannonball there, or, if you've completed the easy Varrock achievements, another option is to teleport to Edgeville and smelt the cannonball at the furnace located just east of the lodestone and then use the Grand Exchange trapdoor shortcut to get to Keldagrim. To craft a golden cannonball, either use a gold bar on a furnace, or smith directly from the furnace (both will bring up the dialogue asking you if you want to make a golden cannonball).

Back in the Keldagrim caves, show the golden cannon ball to Dondakan. He eventually agrees to try shooting it at the rock. A cutscene ensues in which Dondakan fires the golden cannonball, and it passes right through the wall and disappears.

Astonished and excited, he plainly suggests throwing you at the wall, but he needs the schematics to modify the cannon to be able to fire a human. Considering the safe passage of the golden cannonball, he also tells you to make yourself a gold helmet, to phase through the wall. 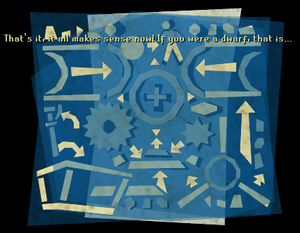 To correctly alter the cannon for safely shooting a human, you need to find all 4 sets of schematics:

This part is simple pattern recognition. Try to piece together the humanoid figure medially placed atop the schematics. Schematic 1 lines up with the body of the figures, Schematic 2 lines up with the head, and Schematic 3 lines up with the legs. They can be manipulated one at a time via the check boxes. This will make the pattern much easier to follow and understand. Once you put them all in their proper places — some trial and error is required — the screen will show: "That's it! It all makes sense now! If you were a dwarf, that is...".

Now you need to make the helm! If you got the Dwarven Engineer's piece of the schematic last, you may use his anvil to make the helmet. The metal bank will not work, but un-noted gold bars can be withdrawn from the metal bank at the furnace north of the anvil. Otherwise, the quickest access to an anvil is to teleport to Lumbridge and use 3 gold bars on the nearby anvil or use an (attuned) teleport crystal to Trahaearn.

If you've completed The Giant Dwarf quest, a fast way to get back to Keldagrim is by using the train cart in the south-east corridor of the cave under White Wolf Mountain or use a Luck of the Dwarves. You may also use fairy ring code DKS and enter Keldagrim's cave entrance slightly to the west, then cross the river to get back to Dondakan. 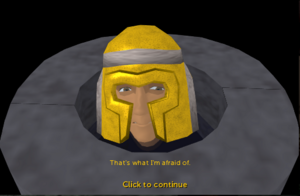 Bank in Keldagrim and withdraw any combat gear required to fight a level 50-56 enemy, along with your gold helmet; make sure to keep six to fifteen free inventory spaces for collecting gold ore (gold ore collected outside will disappear, so will not work during the quest). Once you are ready, go back to Dondakan with the completed schematics, and ask him to shoot you into the rock.

Once inside the rock, you will be surrounded by gold ore and veins; mine as much as you can. The upcoming enemy's combat level will be anywhere between level 50 and level 56, decided by how much ore you mine. With less than 6 ores, it will be level 56 and have the ability to regenerate infinitely; if the quantity of ores is between 6 and 14 it will be level 53, and with 15 gold ores or more, it will be level 50. The gold ores must be in your inventory. 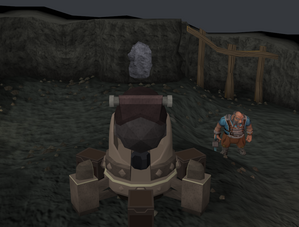 Into the Rock
A non-unlockable music track that plays during the firing of you into the rock.

You must keep on your gold helmet whilst in the cave; otherwise, you'll be kicked out of it, and all of your mined gold will disappear.

You only have eight minutes in there to do everything, so be swift. When you have enough gold, head to the centre of the area, where you will find a set of flames. Go through the first wall of flames — do not stay for too long, or you will start taking damage. Right-click on the next ring of fire, and select Talk. An Arzinian Avatar will come and attack you. 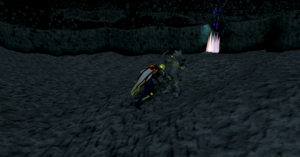 The spirit can attack with any combat style; which form it takes is dependent on your highest combat skill. If your Magic level is higher than the other combat levels, the Avatar will attack with Ranged. See the Combat Triangle for more details.

You can use prayer for an easy fight; the spirit shouldn't take too long to kill. If you are close to dying, you can take your gold helmet off to leave the mine, or, if you fail to defeat the demon within the time frame, you will be teleported outside the mine, losing all mined gold.

When you have defeated the demon's avatar, you will be teleported out of the mine. Speak to Dondakan to finish the quest. 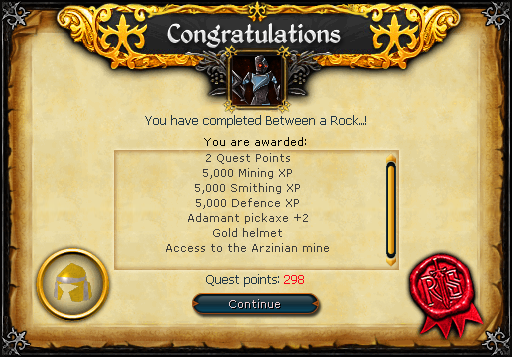 Between a Rock... is directly required for the following quests/miniquests: