From the RuneScape Wiki, the wiki for all things RuneScape
Jump to navigation Jump to search
The Old School RuneScape Wiki also has an article on: osrsw:Music Player

The Music Player is the screen on the interface where players can choose the background music they hear. Many different tracks are unlocked as they play the game, and the player has a counter that keeps track of how many songs the player has unlocked. Players will be informed via red text in the chat box whenever they unlock a new track. When a new song is unlocked the audioplayer will automatically switch to the new song. Currently since 4 January 2022 there are 1,334 music tracks on the music player.

Players can click on the button at the top of the screen. If it is on, the track played on that moment will automatically repeat itself. Players can also click on green titles to choose which track to listen to. Titles in red have not been unlocked, and thus cannot be played.

With the HD graphics update, the Music Player in fullscreen High Detail mode is now translucent. It appears at the bottom right corner of the screen. 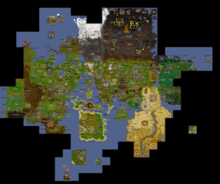 RuneScape map from May 2006 with all music areas marked on it.

Before the music system update on 5 February 2008, each area had a certain music track that unlocked and played there. Some music tracks were used in multiple areas. When music was being added for the release of RuneScape 2, the music areas were squares that consist of 64 by 64 tiles.