From the RuneScape Wiki, the wiki for all things RuneScape
Jump to navigation Jump to search
"QC" redirects here. For the Cape of Accomplishment, see Quest point cape. 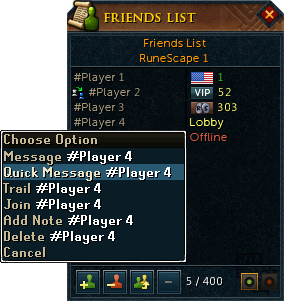 Quick Chat is a method of talking using preset messages. It was released on 21 May 2008. Jagex has stated on 9 February 2009 that Quick Chat was introduced to comply with legal responsibilities, and was not because they wanted players to stop using free chat[1]. If a player uses a birth date that indicates that they are under the age of 13, that player is only allowed to use Quick Chat.

Quick Chat works by selecting from a database of messages. It also provides information about items, similar to the Grand Exchange item database; the user simply types an item name and finds it from the list of items. This is the same with locations, food, and monsters, as it has a database for each respectively.

Quick Chat is fast because it can be activated using keyboard shortcuts.

The current Quick Chat official world is World 96, as this is the only world where you can't chat freely. Many players use this world to get lots of raw items without competition. The wealth evaluator has an option for sharing how much wealth the player has, that is not available under the normal Quick Chat interface.

This only works in certain places. Depending on where you are, there are pre-set messages just for you. Hit F10 to view these. The places in which context-sensitive chat works are:

Using the context-sensitive chat feature outside these areas will instead bring up the menu for the skill you last trained. Melee combat however used to always to bring up Attack, although this has now been fixed.

For example, if you last cut down a tree, pressing F10 will bring up the Woodcutting Quick Chat menu.

In addition to the Quick Chat update, the update also changed some of the previous keyboard shortcuts and introduced a new shortcut allowing the user to repeat the last Quick Chat message, along with other shortcuts.

The following shortcuts only work if the chatbox is active (Click on the space beside the username).

Given that Quick Chat is available to both muted and non-muted players, as opposed to normal chat (only accessible to non-muted players), some have expressed concern that it will become a tool for spamming. It remains to be seen whether this is the case. Quick Chat is reportable and there are no rules for it, because players with a permanent mute are limited to Quick Chat.

The other concern is as to whether it will be a useful feature for most players. The main problem with the system is the sheer number of combinations, which makes it more difficult for players to learn specifics.

Over its history, Quick Chat has referred to a number of unknown items. These items were found by searching the "I like your item...","I got item:..." and "I got an item:..." option. The items are all actual items in the game engine, but have not been released for one reason or another. Some of the Skill guide icons are actual items which appeared on the list. A majority have been removed, however some are still present.

These items are only obtainable virtually; i.e. you cannot physically own the item in your inventory. These include spins from watching an advertisement (which is automatically redeemed) and a number of cosmetic overrides:

The Bird and the Beast buildings: