Succession is the final quest of the Legacy of Zamorak quest series. It was released on 5 December 2022.

Talk to Adrasteia at Falador Castle. She will ask for your help as she fears that Bilrach is planning something nefarious now that the Zamorakian Civil War is over and that she has a duty to protect them as Basilissa. As her coronation ceremony is coming up and she would not have the time to address issues personally once she's crowned, she wants to deal with him now before the problem becomes worse. She will ask you to take her to Senntisten. Head to the entrance of the Elder God Wars Dungeon and select the quest option, where you and Adrasteia will head to The Zamorakian Undercity prison.

Clues in the prison[edit | edit source] 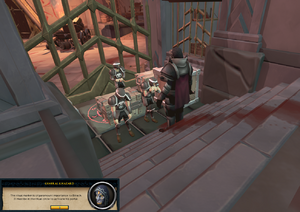 The player must search for five clues in the prison. Each clue will have a blue aura emitting from it indicating it is a point of interest.

Upon finding all the clues, Adrasteia will surmise that General Khazard was here with some of his soldiers, who were moving an item of important significance. The player will then control Khazard and must move the largest crate into the ritual circle. You can crush the guards as needed, although only with the largest size crates. With all the clues found, she will ask you to head to Menaphos for the second part of the investigation.

Head to the Grand Library of Menaphos to begin the second investigation. Adrasteia will also tell you that the Soul altar and The Magister's chambers are also worth investigating. Each area has three clues and the player can talk to Adrasteia to move around each location. 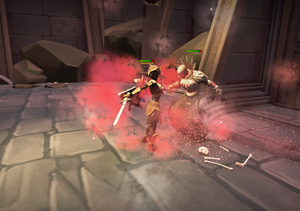 When all nine clues are discovered, Adrasteia will narrate that The Forgotten Warrior had came to Menaphos to demand Oreb's knowledge of soul transfers. He refuses, believing them to be weak and their master of no importance. Vengeance will then fight him to prove that she is strong and has no need for the gods' faith. The player will control Vengeance and fight Oreb. He does not have any special attacks and only has 17,500 health. The player has access to all one-handed melee, shield defensive and constitution abilities they can use. Once Oreb reaches 0 health, he surrenders.

If the player dies twice, they can skip the fight.

Adrasteia will then realise something is off but decides to return to the safety of Falador Castle to discuss the matter further. 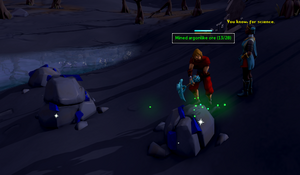 Return to Falador Castle where Trindine will appear in her alter ego. She will tell you that Bilrach's forces are recruiting at the Mage Arena and suggests you go there. However, without Daemonheim's equipment, there would be no way to do so without getting suspicion. However, she reveals that a cluster of argonlike ore surfaced near Daemonheim peninsula and that it would prove useful in the infiltration.

Make your way to the location Trindine mentioned, which is south of the shipwreck by the peninsula. The Wilderness Flash Events teleport to the Ramokee Incursion can prove useful in reaching there; otherwise, teleport to Daemonheim and make your way south. Mine 28 pieces of stackable ore, after which Adrasteia will ask you to smelt it into bars. A furnace can be found at the eastern ruins, although players should be wary of aggressive gargoyles in the area.

Smelt the ore into bars. Adrasteia will then tell you that there's an anvil near the Mage Arena, but the path to there is infested with a wide plethora of dangerous and aggressive monsters. She will suggest a safer alternative of using the lever by Edgeville to arrive at the Deserted Keep. The fastest way to get there would be a Slayer master cape and teleporting to Mandrith (who's right next to the anvil), with the second fastest being a wilderness sword 4, teleport to the Wilderness Agility Course and running north-east.

Smith the bars into argonlike equipment. You will use the 28 bars, to create a set of argonlike equipment for both yourself and Adrasteia, but will be forced to make her a pickaxe as a weapon due to not having enough bars. She will help you bank any items as you must need an empty inventory and proper equipment to proceed.

Head to the Mage Arena and talk to Vengeance, who will deem the two of you of having potential and asks a few questions to vet your capabilities. If you make an error, simply talk to her again, although you will have to reset from the first question. 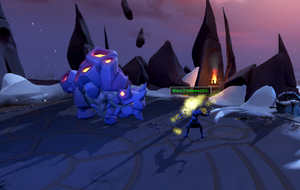 Impressed with your answers, Vengeance will allow the two of you to join and send you into a sparring session against Bilrach's forces.

The enemies drop healing orbs to restore health as needed.

Once Mal is subdued, Vengeance will dismiss you for the day, during which you should investigate for four clues in the arena:

Once all four clues are found, Adrasteia will recollect that Bilrach went to the Mage Arena to confront Kolodion for his knowledge of magic. He offers wealth, but Kolodion refuses and wants territory, namely the kingdom of Misthalin. Bilrach states that he is unable to do so, so Kolodion refuses the offer. Angered, Bilrach uses his magic to subdue him. 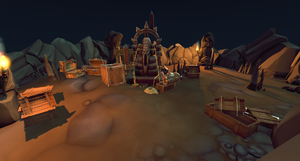 The modified ritual marker beneath the Mage Arena 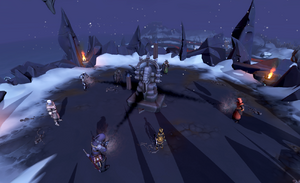 Adrasteia will then realise that Bilrach intended to combine the ritual marker along with Teragardian and Kolodion's magic to create a spell that would wipe half the souls of the human kingdom to empower himself. She will then ask to investigate the caves underneath the arena, in which you will find a ritual marker that appears to be nearly complete.

Take the rune pouch in the room and open it for a strange-looking fire rune. Use it on the sharp rocks to break it into fragments and collect the dust to the north with the empty sack. Have Adrasteia imbue the runes with unstable energy and plant them on the marker. Use the collected dust on the pool to the south to smear the runes. With the sabotaging complete, step into the sparking pool to the south to return to the Falador throne room to begin Adrasteia's coronation. A cutscene will ensue where Bilrach attempts the ritual with his followers, only for the marker to explode in his and the attendees' faces, ruining his plan and saving the human kingdoms from ruin.

Note: If you are also part-way through completing Twilight of the Gods, it is possible that Adrasteia will not be available in the throne room until that quest is completed.

Back in the Falador throne room, Adrasteia will state that she intends to complete her coronation. Before she starts, the human ambassadors she invited are squabbling over who should sit where on the table, and thus she asks you to help plan out where they should sit.

Have the ambassadors sit in the following order: Asgarnian, Kandarian, Menaphite, and Misthalinian. If a mistake is made, the player can reset; Adrasteia will also remark if the seating is correct or not as another indicator.

The coronation and usurpation[edit | edit source] 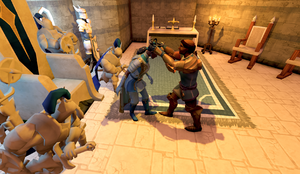 A cutscene will the ensue where Adrasteia is crowned and addresses her people, who cheer in support as she sings a Hallow song to her people.

Back at Zamorak's hideout, Moia returns and finds an angered Bilrach who accuses her of betraying him by withholding vital information regarding the sabotage. Moia states that she didn't need to get involved and that two mortals did so, but he becomes enraged and orders his guards to kill her. Forgotten warriors will spawn to attack Moia, who has the same abilities as she had in Daughter of Chaos. Kill ten warriors.

Adrasteia continues her song while Moia taunts Bilrach over his weakness. Zemouregal steps in and taunts her uselessness over her weaknesses as a half-Mahjarrat, but Moia reveals otherwise and drains him of energy, leaving him gasping for air. Bilrach will order more soldiers to stop her. Moia has become empowered and now does twice as much damage. Kill twenty guards to proceed. Adrasteia continues her song once more, while Bilrach demands the others to kill her, but they hesitantly refuse, knowing that Bilrach's power is fading. Bilrach tells her that they could've worked together, but Moia states that she had no intention of serving as his vassal. Bilrach commends her for upholding Zamorak's values and that the god would've been proud of her, but decides to challenge her himself to prove his strength.

As Adrasteia finishes up her song, Moia prevails over Bilrach and seemingly kills him, causing his soldiers to kneel and swear fealty to her instead.

After the coronation[edit | edit source]

Back at Falador Castle, the player will experience a strange power and asks what it was. Adrasteia will state that she'll have her spies on it but thanks them for working with her one last time, as she has plenty of paperwork to handle now. 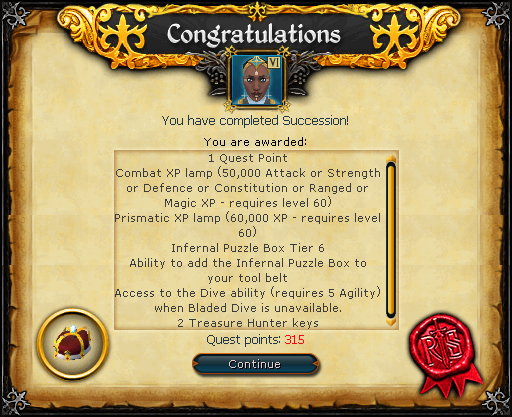 Succession is not currently required for any quests or miniquests.