From the RuneScape Wiki, the wiki for all things RuneScape
Jump to navigation Jump to search
The RuneScape Classic Wiki also has an article on: classicrsw:Evil Tree
This article is about the trees that form part of Distractions and Diversions. For the random event that formerly would break axes whilst Woodcutting, see Ent. 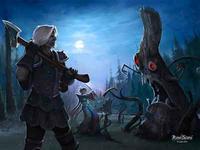 Wallpaper that came out with the Evil Tree Distraction and Diversion

Evil trees are Distractions and Diversions available to both members and free-to-play players. Two separate evil trees may be interacted with daily, nurturing or chopping will yield xp which counts as interaction, inspecting does not. Nurturing and chopping the same evil tree will count as one daily limit. Resets are at 00:00 UTC.

The purpose of the event is to kill the Evil tree, after which the player is rewarded; see below. There are seven types of evil trees and 25 possible locations.

A leprechaun is always found near the tree. He will explain how the evil tree works, and will be the one to reward players after one is killed. He can also provide low-level tools if you've forgotten yours. 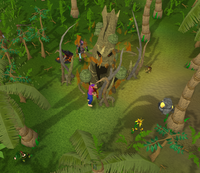 A small group taking on the evil tree.

An evil tree has a total of 3 stages:

There are several ways to locate an evil tree:

The following table lists the 25 possible locations in which an evil tree can sprout:

The evil tree can be killed by chopping at it with a hatchet and lighting fires at its base. Different levels are required to cut and burn different tree types; see table below. Chopping the evil tree and roots earns Woodcutting experience; lighting kindling gives Firemaking experience, both at the base of the evil tree while alive, and at the bonfire once the tree has died. The tree begins with 100% health, and the player with 0% reward. As players chop the tree and the fires burn, the tree's life drops and the player's percentage of reward increases. This can be checked by right-clicking and examining or inspecting the tree. The number of players that need 100% to kill the evil tree depends on the total number of players cutting the tree.

As with all woodcutting, higher-tiered hatchets will chop more accurately than lower-tiered ones providing experience quicker. Machetes can be used to chop evil roots more effectively than some hatchets. If players have a rune hatchet and a red topaz machete in the inventory or tool belt, the machete is automatically used to cut the roots, indicating that it works better. The dragon hatchet, inferno adze, and crystal hatchet are still faster than any of the machetes. When four evil roots are active, cutting one will take the least time. As well as this, when three evil roots are present the fourth will respawn slower. It takes at least one minute for new roots to regrow on each side.

To burn the evil tree, the player will require some kindling attained from chopping down one of the four roots which sprout along the sides of the tree. The evil roots will strike and stun players who attempt to cut or burn the tree adjacent to it, also forcing players who are standing near to jump away each time they sprout. By standing directly on these spawn spots the players will jump away instead of being stunned by the root when it sprouts. There are eight spots at the base of the tree to light. These fires are unique for every player and never go out until the evil tree is dead.

By keeping one root down at a time, even solo players can cut roots quickly to get back to the tree. Attempting to cut a root while one is already down will make that root take much more time to cut. An evil tree can last the maximum 30 minutes if not too crowded. More players joining in will do more damage therefore lessening the tree's life and up time.

Eventually the tree will die and become a fallen tree, from which players can receive their rewards, and then players may burn spare kindling in it for Firemaking experience. A maximum of 200 kindling can be held at one time. A fallen tree will remain for 10 minutes before disappearing.

Fires will continue to burn the evil tree and accumulate reward percentage even if players leave the area or exit to lobby. However upon logging out or switching worlds, the fires will go out, although any acquired reward percentage will be kept. As most evil trees are killed by lightning (see below), if players don't want the Woodcutting experience they can simply clear all the roots once, light all 8 fires (or clear 2 roots on opposite sides and light 6 fires), then leave to do something else and come back to collect the rewards after 30 minutes are up.

An Evil Tree is struck by lightning.

The evil tree being struck by lightning and brought down to 50% or 25% health interrupts woodcutting, requiring players to click the evil tree again to chop it.

When an evil tree falls and petrifies, players collecting rewards from it may get any of the following items: 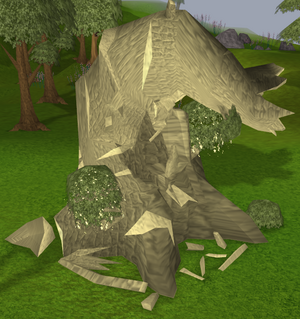 The normal reward received is various noted logs, coins, and a random tree seed or bird's nest, with sealed clue scroll (easy) and key halves as an additional reward. If there is not enough room in a player's inventory, items will be dropped on the ground instead.

The following table shows the highest reported possible rewards. A lower percentage reduces the rewards, but the same percent will not always equal the same amount of gold or logs: 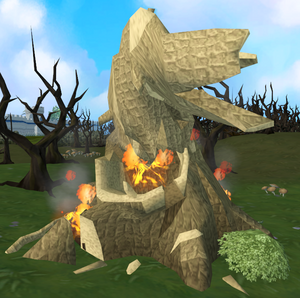 The inferno adze will not automatically light any kindling received.

For a period of time after an evil tree has been felled and a reward claimed, players are given a buff which gives several advantages when chopping at normal, Achey, oak, willow, teak, maple, acadia, hollow, mahogany, arctic pine, eucalyptus, yew, magic, and elder trees:

Players wishing to take advantage of this feature should consider cutting trees which yield logs quickly.

The duration of the buff depends on the percentage of reward claimed from the evil tree and the type of evil tree; see table. This ranges from 2 to 30 minutes and is paused if the player logs out. Players collecting the reward from a farming leprechaun afterwards will receive only half of the magical banking time. Also, if a player hops worlds, a minute is deducted per world hop.

If a player's bank is full when the buff would bank a log, the player will receive a message stating "Your bank is too full to hold any more logs." Players may still chop trees and gain experience from doing so, but no logs will be collected from the process even if the player has free inventory space.

Superheat Form and signs of the porter will not take effect whilst under the effects of the log banking magic, which takes priority over them.

A different distraction and diversion is chosen each week to give the player a key token for simply participating. Once every 4 weeks, the player may gain a key token for chopping an evil tree. Key tokens can only be received when the Evil Tree D&D is the designated D&D of the week. 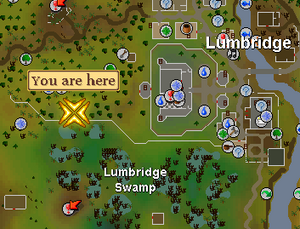