Full view of the Blast Furnace.

The Blast Furnace is a members-only minigame located in Keldagrim. Players use the furnace to smelt steel, mithril, adamant, and rune bars without using secondary ore (coal or luminite). No other bars can be smelted here.

Although the Blast Furnace does not involve combat, players may take damage while using the pump if the furnace's heat level rises to an extreme level, as indicated by the red zone on the furnace's temperature gauge. The amount of damage dealt depends on the player's Strength level.

The Blast Furnace is more efficient when used by a team as multiple players can assume different roles. However, it is possible for players to operate the Blast Furnace alone.

This minigame is disabled for Ironman Mode players.

Travelling to the furnace[edit | edit source] 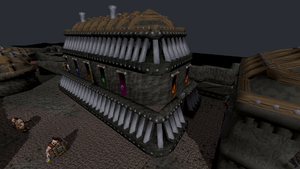 The following skill levels are required to operate the Blast Furnace. If players are working as a team, however, these level requirements may be met by the entire team, not for each individual.

You don't have to bring all these items because there's a Bank chest nearby.

The following items are suggested in order to effectively use the Blast Furnace.

Ore is essential in order to train Smithing at the Blast Furnace. Ore may be obtained through multiple ways: 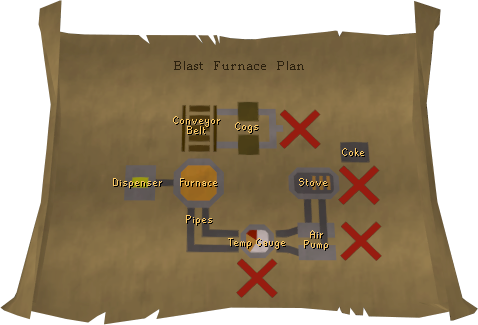 The process for operating the Blast Furnace is as follows:

Players can add the ore to the furnace when the bars are ready to collect, so the next bars will be smelted by other players while smithing the previous ones. 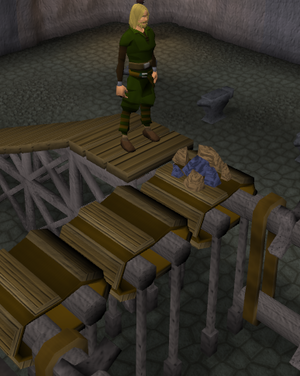 A player puts ore on the belt. 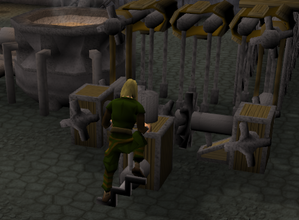 A player pedals to work the conveyor belt.

First of all, players have to put their ore on the conveyor belt. Once the materials are placed on the belt, they cannot be taken by other players. To activate the conveyor belt, a player must pedal the gearbox. Pedalling drains run energy for those with lower Agility levels.

The furnace is limited to a maximum of 28 ore per player, only enough to make 28 bars. There is no way to know how much metal ore is in the furnace until the capacity is reached. A player cannot add ore if there are 28 bars of the same type in the bar dispenser.

The gears driving the drive belt may break while pedalling. While the gears are broken, the temperature of the furnace stays at the minimum and no bars can be smelted. A player must fix them with a hammer (from the tool belt, or respawn on the north-east table) in order to get the belt running again. 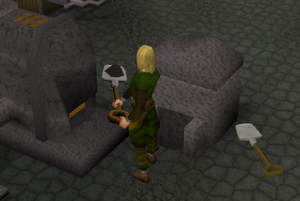 A player loads coke into the stove.

After putting in the ore, the next step is to load coke into the stove with a spade (respawn by the coal pile; the spade on the tool belt cannot be used in this instance). To load coke, click the pile of coke (changing the spade to Spadeful of coke) and then click the stove.

The colour of the grate indicates the temperature of the stove: 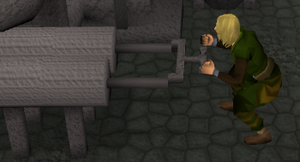 When the stove temperature is hot, it is time to pump air into the furnace. Click on the pump to start pumping. Players must continue to pump until either the bars are smelted, or a pipe or the drive belt breaks.

Caution: Be careful not to pump when the temperature gets into the red zone as indicated on the temperature gauge. If a player continues to pump, they will take damage equal to about 20% of their current life points (for example, a player with 7000 life points would take 1400 damage). Therefore, the player should either have another player warn them when the gauge approaches the red region, or listen for the production of bars, as discussed below.

The Blast Furnace will only produce bars while the needle of the temperature gauge is in the green area of the dial. A player watching the gauge may tell the pumper to start pumping when the needle is in the white and stop pumping when it approaches red (to prevent the pumper from taking damage). This is not really necessary, however, since the bars are produced as soon as the needle reaches green; upon seeing and hearing this, the pumper can stop pumping.

The gauge will also indicate when the stove needs more coke or if a part has broken.

Once the bars are melted, they pour into the bar dispenser and the mould in the centre turns an orange colour. Players have to cool the bars down with a bucket of water (respawn near the sink) before obtaining the bars. A player can smelt up to 28 bars of one type at once and must remove bars in order to add more ore, or else they will receive the message, "You should check and see if the other bars have smelted before adding more."

While the Blast Furnace is in use, the drive belt and one of two sections of pipe will occasionally break. These can be fixed with a hammer, which can be used from the tool belt; otherwise, one respawns on the north-east table. 50 Crafting experience is awarded for each fix, and this does work with bonus experience. 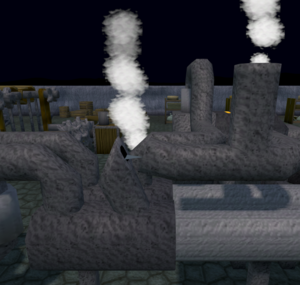 A pipe in need of repair

Full Smithing experience is gained from smelting the bars. There is an anvil nearby to smith any items you wish for additional experience. Magic XP can be gained should one choose to alchemise their produced items.

Additionally, maintaining the Blast Furnace also offers experience in other skills. However, this gives trivial experience: 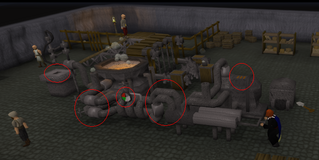 What to check when solo smelting

A single player is able to manage the furnace by themselves if they use this strategy:

The player will receive all of miscellaneous non-Smithing XP in addition to the usual full Smithing XP for smelting the bars. This is the only advantage of using this method. Unfortunately, even the official Blast Furnace world (world 58) tends to be devoid of players here during much of the day, leaving many players with no choice but to work the furnace alone.

This method is not as good as the normal Blast Furnace, but still works great. It helps to be on world 58 in case other players are there.
Items needed: Coins for paying to use the furnace and ores (mithril, for this example) for making bars.

If you want to smith the bars as you make them:
Additional item needed: Varrock teleports

Players will generally profit by turning ores into bars. This calculator gives details on the profit obtained from making each type of bar.

Each bar will produce 75 arrowtips, and the price below reflects each group of 75 arrowtips made from one bar. As these are stackable, there is no need for Nature runes, and these can be sold on the Grand Exchange or used with Fletching skill to create arrows. The prices and the profit is on a per-bar basis and not per arrowtip.

Crossbow bolts are another very popular fletching item, as they are commonly used while ranging. The prices and the profit is on a per-bar basis and not per bolt, as 50 bolts can be smithed per bar.