The standard spellbook, also known as the modern magic spellbook, is available to all players, whereas the other spellbooks can only be unlocked through members quests.

This spellbook contains the most spells (70), as well as the most types of spells; offensive, skills, enchanting and teleportation. It is also the only spellbook with spells that players with a low Magic level can cast.

Jagex updated the spellbook icons in the Run energy upgrade on 9 June 2009.[1]

The Ancient Magicks spellbook is composed primarily of offensive and teleportation spells. It becomes available to players after they complete the Desert Treasure quest.

To change to the Ancient Magicks spellbook, or back from the Ancient Magicks to the standard spellbook, players must enter the Jaldraocht Pyramid in the desert south of Al Kharid and west of Pollnivneach from the rear and pray at the altar. Alternatively, players who have completed Plague's End can use the Elven grimoire found within the Cadarn clan section of Prifddinas to switch between standard spells and Ancients. The Ancient Magicks are considered the most powerful and dangerous spells in Runescape due to their high hits and special capabilities.

Upon the release of The Light Within, several additional Seren-aligned spells were added to the previously Zaros-aligned Ancient Magicks spellbook. These Seren spells range from skilling-related spells such as Crystallise to offensive spells such as Ruby Aurora and some buffing spells such as Prism of Loyalty. Combat-oriented Seren spells generally have teamwork-related effects, and see little use outside of (mostly group) high level PvM. These spells are locked to the player until completion of The Light Within. Additionally, upon completion of The Light Within, the Lunar spell Spellbook Swap becomes accessible from the Ancient Magicks spellbook.

Upon completion of the City of Senntisten quest, four new high-level spells are added to this spellbook: Smoke Cloud, Animate Dead, Exsanguinate, and Incite Fear.

The Lunar spellbook originally contained no offensive spells, but has come to include Polypore Strike and, through Borrowed Power, the Wave spells. However, the majority are defensive, self-help, skill-related and utility spells.

The Lunar spellbook becomes available to a player after completion of the Lunar Diplomacy quest. More Lunar spells can be unlocked after completing Dream Mentor and through the Livid Farm minigame. To change to the Lunar spellbook or back from the Lunar to the standard spellbook, a player must pray at the Astral Altar on the south-east side of Lunar Isle or, if the hard Fremennik Tasks have been completed, at the Elven grimoire found within the Cadarn clan section of Prifddinas. 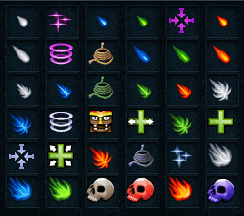 Not to be confused with Spellbook Swap.

Players can switch to Ancient Magicks at the altar inside the Jaldraocht Pyramid. This drains all Prayer points to zero.

players can switch to Lunar spells by praying at the astral altar on the southeastern peninsula of Lunar Isle.

Players who have completed Plague's End can use the elven grimoire found within the magic shop in the Cadarn Clan district of Prifddinas to switch between standard spells, Ancient Magicks, and Lunar spells. This does not drain prayer points.

Alternatively, players who have unlocked and crafted the book switcher from level 60 Invention, when in the vicinity of a bank, can consume the device to switch spellbooks.

Players with level 99 magic who own the Magic cape can use the cape's perk when in the vicinity of a bank to switch spellbooks.