Following Zaros' downfall by Zamorak, Azzanadra returned to Kharid-et, knowing that it would be in imminent danger due to its position. The fort commander at the time was Prefect Livia Drusilla, who was surprised by Azzanadra's arrival, having been told that Zaros himself was coming for an inspection. Azzanadra arrived with the praetor Trindine, and left her and her squad of praetorians as reinforcements for the fort's garrision as he continued to travel to other fortresses to inform their commanders.

Like Ghorrock, the fortress was generally obscure due to not holding any significant importance. However, the Zamorakians soon learned of the secrets it held and sent a massive Avernic army to raze the fortress and take its secrets. Due to the lack of discipline and ingenuity by the Avernic demons, the Zarosian garrision was able to withstand the siege, although a last ditch effort was required to rout the army completely, with the Prefect and her commanders luring the demons into a funnel trap. The Zarosians ultimately emerged victorious, although the Prefect, her officers and soldiers were all killed. The civilians had been evacuated safely during the siege, leaving only a few pontifices and praetorians.

Knowing that they needed to protect the secrets of Kharid-et with their very lives, a pater devised a plan to lure an Icyene force into the fortress, where they would be set upon by reanimated soldiers and demons. The plan worked, and a massive battle took place that left no survivors, making it forsaken that no one dared set foot inside for thousands of years. 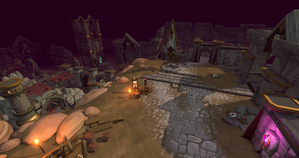 Located near Liam is a door leading to the prison section of the Kharid-et. Liam may be spoken to about the door, and players will find pages from a custodian's log as they excavate finds. When the first and second pages have been found, speak with Liam and he will give the player the missing dial to be placed on the right side vertical set of buttons, allowing the door to function properly. All four pages are required for completion of the Prison Break mystery.

There are 17 achievements in this subcategory (showing 17).