From the RuneScape Wiki, the wiki for all things RuneScape
Jump to navigation Jump to search
This article is about the restored variant. For the damaged variant, see Chaos star (damaged).
Item JSON: {"edible":"no","disassembly":"yes","stackable":"no","stacksinbank":"yes","death":"always","name":"Chaos star","bankable":"yes","gemw":false,"equipable":"no","members":"yes","id":"49808","release_date":"30 March 2020","restriction":"surface","release_update_post":"Game Update: The New Skill Archaeology is here!","lendable":"no","destroy":"You will have to find another through Archaeology.","highalch":false,"weight":0.001,"lowalch":false,"tradeable":"no","examine":"A fully restored chaos star.","noteable":"no"}

A chaos star is a Zamorakian artefact which is made by restoring the damaged variant at an archaeologist's workbench after the damaged variant is excavated from the Shakroth remains excavation hotspot at the Infernal Source Dig Site with level 68 Archaeology.

It can be added to the tool belt. Carrying it in either backpack or tool belt prevents the player from failing chaos portals while navigating the Vestibule of Futility.[1] It also allows players to traverse the Dagon portal from the Dagon Overlook to the lowest level of Infernal Source, which is required for the Dagon Bye mystery.

A chaos star can be combined with a chaotic gatestone to create the Abyssal Gatestone for the Nexus Mod relic power. 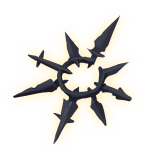 The Chaos star in the journal.