From the RuneScape Wiki, the wiki for all things RuneScape
Jump to navigation Jump to search
For the achievement, see Violet is Blue (achievement).

Violet is Blue is a quest that was released together with the 2018 Christmas event. It features the six-year old orphan Violet who has been raised by yeti parents and wishes to go to the Yeti Town's festival. Violet's adoptive parents worry about her being accepted by other yetis and so agree for the player to take her to the festival. The player has to solve puzzles to help Violet through obstacles in a fun way.

To begin the quest, talk to Violet at the base of White Wolf Mountain (Taverley side) and accept the prompt. After doing so, Violet enters the Land of Snow portal to the north. Follow her inside and you'll enter the Land of Snow. At the other side, you'll be greeted by Violet throwing a snowball at you, knocking you over. Violet challenges you to come and get her at the top of the hill, but there's a challenge – giant snowballs are rolling down and you have to navigate your way around them to reach the top (Surge or similar abilities cannot be used). If you're hit by a snowball, you are returned to the bottom of the hill and must try to make it to the top again. 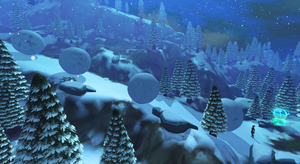 The snowballs rolling down the hill

If you get hit by a snowball five times while trying to go up the hill, you are given the option to make them roll down the hill slower, making it significantly easier to reach the top. After a while, the snowballs will stop rolling down the hill completely. Once at the top of the hill, talk to Violet again, who runs away after a roar from an unknown creature. You are transported to the grounds of a lodge. Knock on the door to the north and then attempt to break the door down or knock again. Give any response to the creature and then it'll let you into the lodge. 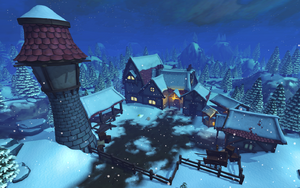 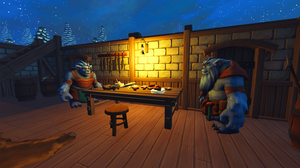 The yeti parents, Betty and Trevor

Inside are two yetis, Betty and Trevor. Speak to them, and they reveal they've just made stew – to which you quickly assume that they captured and cooked Violet. Violet comes out of the other room to your relief, and Betty and Trevor thank you for bringing her home safe. Violet explains that she just wants to go to a festival, and Betty informs her that it's too far away and too dangerous. You explain that you could help her go to the festival, and the yetis request to speak to you alone, leaving her to go to her room.

Accuse the yetis of capturing Violet, and they explain that she is an orphan and was raised by them ever since she was found at their doorstep. They are worried about bringing her to the festival, where she would not be accepted by the other yetis. Agree to help them and they will ask you to relay their good news to Violet, who is in her room to the north-west. Speak to Violet to help her pack for the trip, who will then play a game of I-spy with you.

You will need to find 5 items for Violet, where you are given a certain letter which corresponds to the first letter of the item. These items are randomly generated for individual players and can be found in her wardrobe, toy box, or under her bed. Note that some letters may represent more than one item. Each letter matches to an object.

When you've found 5 items for Violet, speak to her again and she will tell you to speak to Betty and Trevor again. Go back in the other room and speak to one of them and Trevor will explain that he'll come with you as he knows the route well. Exit back through the front door to go on an adventure. A cutscene will ensue where you, Trevor, and Violet will leave the confines of the lodge and make your way down the path.

Going on an adventure[edit | edit source] 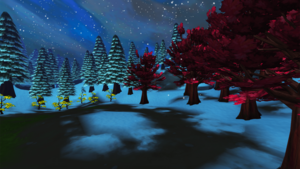 The opening after going down the path

After the cutscene, speak to Violet and you'll remark that the path only seems to go towards a dark area to the north. Violet explains that she doesn't like the dark, so you agree to find a way to light up the path ahead for her. Investigate the frozen bucket to the west to pick it up, receiving an empty bucket and then investigate the nearby maple trees twice to receive some maple logs.

Investigate the maple logs in your inventory and you'll note that you could craft it into a spile that could allow you to obtain maple syrup from one of the trees you just chopped. Choose to craft the logs, and you'll receive a spile. Go back to a maple tree and investigate it to add the spile, then investigate the "Maple tree with spile" again to receive a bucket of syrup.

Speak to Trevor and ask if he has anything useful, he will give you an empty jar. Shake one of the many bushes in the area, which will spawn a few glowing fireflies near it, which can then be caught. With a firefly in your possession, head back to Violet's side, speak to her, and you will tell Violet to hold the firefly so that its light can brighten the way for Violet. However, Violet will be amazed at how shiny the firefly is, and proceed to eat the firefly without a second thought, remarking that it was delicious, to your dismay. You then chastise Violet for eating it, to which Violet responds that fireflies taste like popping candy and give her a warm feeling in her tummy. You realise that giving Violet a firefly to hold onto is not the wisest of ideas, and thus formulate a new plan.

Walk north through the path that goes towards the dark area and check the leaning trees as you go, noting that they appear to be a great spot to place makeshift lights to light the way. However, you would need to find a way to attract the fireflies to them, and for that, you need syrup. The syrup has to be applied to each of the four trees, upon which you should head back to Violet to inform her of the new plan.

Before that, however, you need to obtain an empty jar, which Trevor just so happens to have on him. With the jar in hand, you can finally set to work catching fireflies and putting them in the jar. With 10 fireflies in the jar, you are finally ready to reveal your plan to Violet, which is to have her let out the fireflies as you run through the path so that the fireflies will fly to the syrup-covered trees, giving you light to see the way as you proceed.

At the end of the path there will be 15 headless ice golems running around. Violet will insist on helping them, so gather some icy snow from behind her to form heads for the golems. Violet will suggest faces to place on the snow heads, either happy, sad, laughing, or angry. Match her expression until you've got enough heads and then click on the golems to throw the heads to them. Once you finish making heads, there is no limit how many she could throw, so spam clicking here works. Once all 15 golems have heads, talk to Violet again and she'll be happy. Continue on your way to the village.

You will come across an ice-covered lake. Unfortunately the ice won't be strong enough to support your weight and there is no alternate path. Violet will roar at the lake, causing snow from the nearby trees to fall and solidify, strengthening the ice. You will suggest to Trevor that by knocking more snow from the trees, it'll become strong enough to cross safely. Trevor agrees and prepares to roar, but you stop him. As this is Violet's adventure, she should be the one to roar.

Violet needs something to roar at. There are three melted snowmen nearby, which can be rebuilt with 25 snowballs for the body, a carrot for the nose, a top hat for the head, seven coal for the face, and two branches for the arms. Top hats and carrots can be found from the abandoned crates to the west. Sets of branches can be obtained by pruning trees to the south-west. Snowballs can be obtained from the piles of snow to the south. Coal can be found in the abandoned crate to the south-east. Once the snowman is rebuilt (this will reward 24 Construction experience), talk to Violet to point it out to her. She'll walk over to the snowman and roar at it, knocking it over and knocking snow off the trees. Repeat this three times to strengthen the ice enough to cross. Continue heading northwards.

You will now come across an ice maze. Head east to find an interactive icy water. Reach into the water to find a barrel. Speak to Violet and she will climb into the barrel to start the puzzle.

The objective of the puzzle is to navigate the barrel into the other end of the maze. Gaps in the ice and rocks and debris on the ice stop the player and Violet before them, but the piles of compacted snow make them stop on them. If you are stuck during the puzzle, you may use the right-click "Reset puzzle" option on Violet's barrel.

The solution is to push Violet along the yellow path while following the blue path yourself. 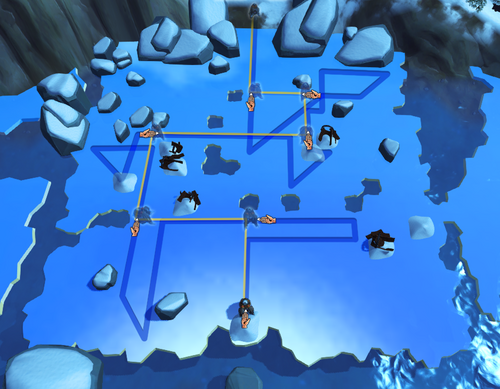 The solution to the ice puzzle 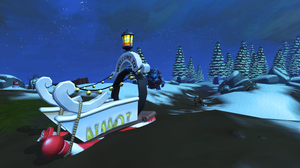 You've almost reached Yeti Town – it's just at the bottom of the hill. However, the slope is too steep to walk down and Violet is worried that the Yeti children won't want to be friends with her, so you must help her build a sled.

Investigate the placeholder model of the sled in the open space to initiate dialogue with Violet. There are several materials you must gather to build it:

Add the items to the sled by investigating the "open space" multiple times.

Talk to Violet again, who wants to give the sled a name. She can't think of one, so she will ask you to choose for her (several of the names are pop culture references). Violet will accept any name you pick from the list.

After picking the name a cutscene will play. As you and Trevor walk into Yeti Town and Violet sleds in, the camera pans and shows various Yetis gathered around a bonfire, eventually showing the snowcone seller and the Yeti children around him. The children admire Violet's sled, compliment her hair, and compete to be friends with her, making Violet extremely happy. 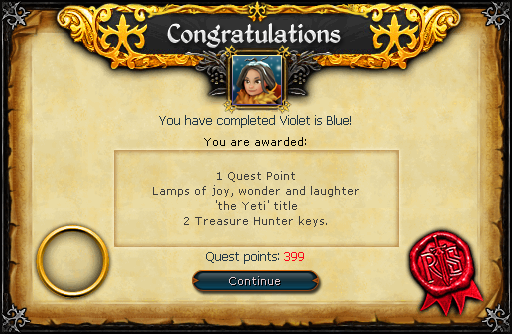 Violet is Blue is directly required for the following quests/miniquests: