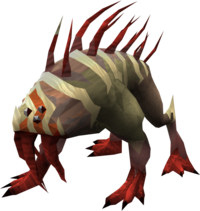 A Blood reaver, a Virius in the service of the Zarosian general Nex.

The Virii (singular Virius) are a type of quadrupedal Chthonian demon[1] that Zaros describes as pack animals, akin to Avernic Hellhounds or dogs.[2] Like all demons, they come from the world of Infernus, and like many other Chtonians, they were bound to the Demon Pact after Zaros tricked Hostilius the Autocrat into signing over twelve of his legions.[3] A pack of Virii called the Blood reavers are imprisoned and frozen within the Ancient Prison near Trollheim, where they serve the Zarosian general Nex[4]. With the exception of Ocellus and Virii encountered in the Heart of Gielinor, they are the only known example of their race.

Ocellus is a notable example of the Virii as unlike the rest of his kind, he is capable of speaking the common tongue (though he can only speak short phrases), is bipedal and significantly larger. However, this is due to his status as a Guardian of Guthix, as he was blessed by Guthix himself at the end of the God Wars.