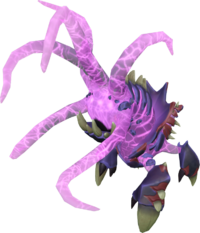 Abyssal demons, some of the remaining Chthonians that were sent to the Abyss.

The Chthonians /ˈθoʊnjən/ are a race of demons that once ruled Infernus, the realm that demons originate from.[1]

Even more so than other demons, they come in a wide number of shapes and sizes. Known types of Chthonian include Abyssal demons[2], Bloodveld, Nechryael[3], Penance, Ripper, and Virii[4], but other unusual creatures are likely to be Chthonian as well.

The Chthonians were the second race to rule Infernus, after they overthrew the Infernals that preceded them. Like the Infernals, they enslaved the primitive Avernic tribes for use as soldiers.[1] The Chthonians were cannibalistic, and they had the ability to absorb the entire essence of what they ate. Hazeel believed that the Chthonians that Zaros brought to Gielinor were ignoring Zaros' decree against eating humans and feeding on the homeless in Senntisten.[5] One of the offers that Zaros made to the Chthonians was the chance to spread out into other worlds and consume new races that could not be found on Infernus.[6] The only thing that the Chthonians couldn't eat was the subservient Avernic race.[1]

Chthonians could grow to immense size, if they consumed enough. Hostilius the Autocrat, ruler of the Chthonians, was described by Sliske as towering over Zaros, whom Hostilius referred to as "tiny". In the course of the Chthonian uprising, Hostilius had consumed many Infernals, in addition to his own kin, which contributed to his great bulk.[6]

All Chthonians desired to eat the flesh of their own kind. To prevent disorder and constant in-fighting, legal restrictions were placed on the consumption of another Chthonian. The laws crafted by Hostilius encouraged Chthonians to engage each other in battles of legal trickery and manipulations, where the loser would be entrapped in a position where their opponent had earned the right to consume them. It was through this legal trickery that Zaros won command of twelve legions from Hostilius, who had managed to write the contract of command in such a way that it would belong to the eldest signatory, thinking that Zaros was a young upstart in comparison to himself.[6]

Chthonians lived in luxury, on both Infernus and on Gielinor. The Avernic troops that they took to Gielinor also gained a taste of this luxurious lifestyle, and began to feel the stirrings of rebellion. Zamorak fed the flames of this dissatisfaction, and used the promise of an uprising against the Chthonians to win the Avernic to his side.[1] When Zamorak struck down Zaros and collapsed in agony as he ascended, the Tsutsaroth demons led by Thammaron gathered around Zamorak and opened a portal to Infernus.[7]

A civil war raged in Infernus for nineteen years[7], with Zamorak leading the Avernic and a few Chthonians (bloodveld and some ripper demons) against the Zarosian Chthonians. Zamorak and his demons eventually prevailed, with most of the surviving Chthonian demons banished to the Abyss, or Hostilius' remains. Some still remain there, while a few, as Palkeera notes, were summoned in an experiment at Viggora's Folly.[1]

One Chthonian demon, Senecianus, went insane and was committed to the Senntisten insane asylum overseen by the Mahjarrat Nabor. He was subsequently forgotten about until being rediscovered in the Fifth Age by Ingram, and (taking the form of a ghost girl) he becomes one of two creatures haunting the Gulvas Mansion, which the player explores during Broken Home.