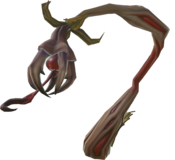 Devil's snare are the third strongest of the vile bloom, requiring 90 Slayer to kill. They are found in the south-east area of Anachronia. A cluster of five in the south-western area of the south-eastern ruins, and two clusters of four and five on two separate islands north of the aforementioned ruins.

These monsters are notable for dropping lots of supplies that are useful for making prayer potions and super restores, as well as dropping relatively large quantities of grimy spirit weed.

They can lash at the player from long distances, up to nine squares away and deal high melee damage. After 10 auto attacks (24 seconds), the Devil's snare will grasp the player similar to Telos, the Warden's tendril attack and deal rapid amounts of damage, while healing the Devil's snare every tick. The player can break free by dealing 10,000 damage to the plant. This can be achieved in one hit using Tuska's Wrath while on a slayer task.

An alternative method: fight via planting the devil's snare seed in the fertile soil patch north of the overgrown idol.