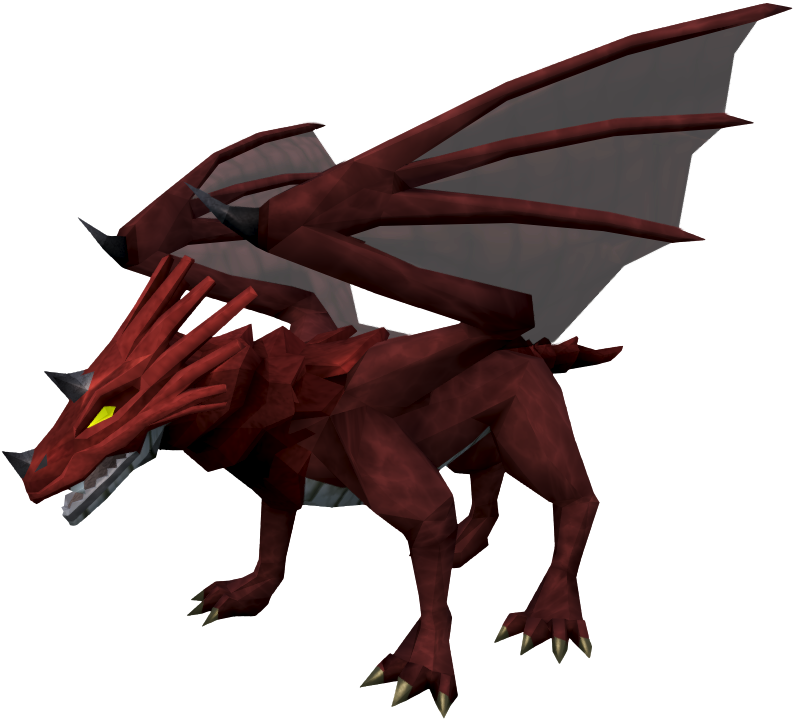 Red dragons are the second strongest chromatic dragons. They primarily attack using a Fire Bolt spell, but as with all dragons, they can use a magic-based dragonfire attack. They also use melee if the player gets within melee range. The dragonbreath attack can hit from a distance as well as up close, so an anti-dragon shield, the Protect from Magic prayer, or an antifire potion are essential when fighting them as they can otherwise hit over 1500. Money can be made by selling their drops. Collecting the hides and bones makes each kill worth approximately 4,567 coins.

If assigned red dragons as a slayer task, baby red dragons may be killed as an alternative.

The Red Dragon Isle is a dangerous place to kill red dragons, but is relatively empty. If killing them there, only bring items you are willing to lose, as it is a multi-combat area.

The Brimhaven Dungeon location is a safer place to fight Red dragons. If you are fighting them here, you will need 875 coins for the entrance fee, or alternatively Karamja gloves 3 which also provide a teleport. You will also need 30 agility or Karamja gloves 4. It can be useful to bring Bones to Peaches tablets to turn bones from wild dogs in the area into food.

A simulated Red dragon, found at an exhibit in the Varrock Museum.

Red dragons are weak to bolts, although other ranged weapons will prove effective. Ranged armour will protect you from their magic attacks, and you can place yourself out the range of their melee attacks. With a Dragonfire deflector and at least Royal dragonhide armour, one can completely negate the need to bring food with moderate use of the Rejuvenate ability.

If magic is your preference, you should use the highest levelled wand you can wield, in tandem with an anti-dragon shield. Without a specific magical weakness, use the most damaging spell you can cast.

Due to their classification as mages, it is not recommended to engage these monsters in melee combat without sufficient equipment (level 60 or higher) and stats. If melee is still preferred, then seek to increase your accuracy with potions and prayers.