From the RuneScape Wiki, the wiki for all things RuneScape
Jump to navigation Jump to search
The Old School RuneScape Wiki also has an article on: osrsw:Aberrant spectre
? (edit) 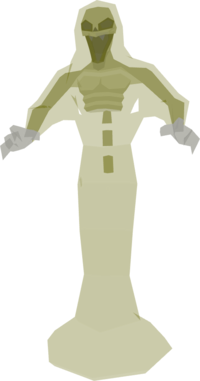 Aberrant spectres are Slayer monsters that require level 60 Slayer to kill. They frequently drop large amounts of valuable herbs and herb seeds. They are an excellent source of medium-high level herbs, such as ranarrs and lantadymes, and also drop various low and high-priced seeds.

A Macaw summoning familiar can be used, as it will upgrade the tier of herb drops, but this is not especially useful given the low rate of occurrence and the chance of upgrading an herb into a less valuable result. The macaw can also produce herbs with its special move, although herbs created this way will no longer be noted (this special move does not work in the Slayer Tower). Herb gloves (a reward from the Fist of Guthix minigame) are useful for targeting specific herb drops, and thus have a much more consistent result.

Aberrant spectres have an extremely potent stench that drains stats and life points very quickly, so they are very deadly to fight without proper protection. A nose peg, Mask of Stench/Helm of Foulness, or slayer helmet (or any of its upgrades) protects against the stench. A gas mask does not work for this.

Spectres use a rapid and quite accurate Magic attack, with a max hit of 297, which will hit fairly often even with good magic defence. If fought without appropriate protection, you will be hit for heavy damage every hit, and suffer massive stat drains.

If a tank approach is desired when killing aberrant spectres, a shield or shieldbow is of utmost importance, as it enables the use of defensive and healing abilities. It is possible for a player in Karil's armour with a dark bow or blisterwood stakes and a shield to stay for an extended period of time with minimal food or prayer if Rejuvenate, with shield, or Guthix's Blessing, without shield, is used upon filling the adrenaline bar.

Another easy and fast method to kill aberrant spectres in the Slayer Tower would be to use blisterwood stakes, sagaies, or dragon darts with either off-hand dragon darts or a dragonhide shield with full dragonhide armour, along with the proper protection while using ranged abilities, using Rejuvenate and Regenerate as and when needed. Using this method along with Ava's accumulator will allow for extended trips with minimal loss of ammunition and food. Using Sacrifice appropriately will eliminate the need for food and any defensive abilities if you are above level 130 combat.

Spectres have a short-range magical attack. Players can take advantage of this in the Slayer Tower and Pollnivneach Slayer Dungeon by luring them into an obstacle and using a weapon with a large attack range. Spectres were made aggressive in the 14 July 2014 update. 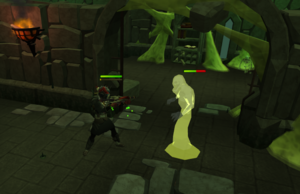 Slaying spectres in the Tower.

These aberrant spectres are located on the 1st floor[UK]2nd floor[US] of the Morytania Slayer Tower, on the east side. There are gates that can be opened to get to them at the entrances to their area.

There are a number of ways to reach the slayer tower. The fastest is the teleport from the Mask of Stench/Helm of Foulness to just outside the door to the spectres. A ring of slaying teleports a player directly outside the tower. Alternatively, the CKS fairy ring, Canifis Lodestone, Kharyrll teleport or Kharyrll Portal will teleport players near-by to return. The player can also use a Mask of Broken Fingers, a Mask of the Abyss or their upgraded versions to teleport to other floors of the Slayer Tower and then use the central stairs.

The spectres here are weak to thrown weapons, so the best option is to use sagaies or blisterwood stakes. Other Tier 70 ranged weapons such as Crystal bow and Karil's crossbow are also viable options, as they can always hit the spectres. If your range level isn't that high, any other weapons below 70 are fine.

In addition, the spectres in the tower are in lower numbers than the Pollnivneach Slayer Dungeon and are fairly spread out, so players may need to wait for the spectres to respawn on occasion. Extra combat xp or cash is available at this location by taking a Slayer contract with Markus so many players come here to do their tasks. The contract gives an extra 22 Slayer experience per kill, regardless of whether or not you have aberrant spectres as your task. If you are interested only in faster kills it might be suggested to use other locations for a slayer task.

Killing aberrant spectres at the Slayer Tower is often used as a way to make money, due to the short distance between the tower and the bank in Canifis. Fast teleport options to a bank, such as the ring of kinship or TokKul-Zo, will reduce banking time further.

Players who use Summoning familiars can recharge their summoning points at the obelisk on the way to the tower. 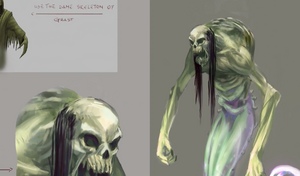 These aberrant spectres are located in the Pollnivneach Slayer Dungeon, in the central area of the bottom floor of the dungeon. The dungeon is accessed by descending the well in Pollnivneach. Players will need to have completed the Smoking Kills quest to access the dungeon. In the dungeon you will be subjected to harmful smoke as well as the Aberrant spectre's stench, so using a slayer helmet is mandatory. Using only the individual components of the helmet will result in almost certain death, either from the spectres' stench or the smoke in the well.

The fastest access is the teleport from the Mask of Stench/Helm of Foulness to just outside the barrier to the spectres. Quick access to the dungeon can also be gained by using a ring of slaying to teleport to Sumona, moving one's house to Pollnivneach and using Teleport to House, or using a Pollnivneach tablet (requires completion of the Love Story quest).

These spectres are weak against arrows, so a crystal bow or magic shieldbow with broad arrows or above is very helpful in killing them quickly. Utilising a combat familiar would greatly speed up kills, as there is a small obelisk in the same area as the spectres.

This place is more deserted than the Slayer Tower, making it an ideal option to finish a slayer task quickly and efficiently. It is recommended to use a cannon here with healing abilities such as Soul Split and Rejuvenate, as protection prayers only offer 50% protection against their magic attacks.

Aberrant spectres are one of the 'races' who have lesser champions in the Champion's Challenge Distraction and Diversion. To fight the Aberrant Spectre Champion, the player must kill aberrant spectres until one drops a Champion's scroll, a very rare drop.

The average Aberrant spectre kill is worth 4,051.88 coins.