From the RuneScape Wiki, the wiki for all things RuneScape
Jump to navigation Jump to search
This article is about the Dungeoneering monster. For the slayer monster, see Soulgazer. 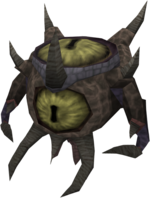 The Soulgazer is a level 99 Slayer monster and a type of Stalker located in Daemonheim that can only be fought while Dungeoneering. Its combat level is 128. It attacks all players within reach at once with an accurate, magic based yellow orb attack that can consistently hit into the mid-400s. Magic damage can be reduced by using Protect from Magic or Deflect Magic. The much sought after Hexhunter bow is only obtainable as a drop from a Soulgazer.

The Soulgazer may be damaged with any style by anyone who is 99 slayer or has used potions to boost to this level. Deflect magic damage and Vengeance will also damage it. The damage of Wrath and the effect of the blood necklace can deal damage to the Soulgazer regardless of slayer level.

Soulgazers appear on Abandoned II, Occult and Warped floors, however on Hard mode, they may appear on all themed floors. The likelihood of encountering a Soulgazer is random and does not depend on the theme of the floor. For example, a warped-theme floor will not increase the chances of encountering one.

Although the theme of the floor does not affect the likelihood of an encounter, there is still major uncertainty over what other factors affect the spawning of this monster. A factor in question is certainly the number of party members with level 99 Slayer. Having a party member with 99 Slayer will certainly allow for Soulgazers to be on the critical path, but having more players with 99 Slayer in the party will greatly increase the chances of encountering a Soulgazer. It is also possible to encounter a Soulgazer with no one in the party having 99 Slayer along a non-critical path, in which case a survivalist's potion may be used to kill it. This is possible even on solo floors, however the chances of them spawning are extremely low. There is speculation that there are allotted "room values" that may not allow for Soulgazers to spawn in solo floors or low floor themes. Also mentioned above was the uncertainty over how the drop system works.

The best way to hunt for the Hexhunter bow is to activate Hard Mode, and open up all unlockable doors from the Smuggler's room until you see a Soulgazer. If not, leave the dungeon for good, and keep selecting another one and repeating this process until a Soulgazer appears. Kill it and hope to obtain the drop. 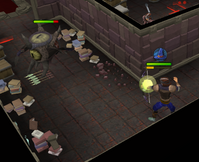 A Soulgazer using its multi-target attack