From the RuneScape Wiki, the wiki for all things RuneScape
Jump to navigation Jump to search
The Old School RuneScape Wiki also has an article on: osrsw:Agrith Naar
This article is about the quest variant. For the variant encountered in the Dominion Tower, see Agrith Naar (Dominion Tower). 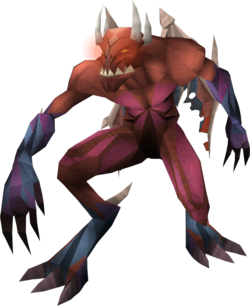 Agrith Naar is a demon, formerly trapped into the human form of Denath, who is the final boss of the Shadow of the Storm quest. He is described as the most powerful and prominent of the demons that cause natural disasters on Gielinor, and indeed he is able to control the weather and create potent thunder storms or sand twisters.[1]

Agrith Naar is fight-able as a class F boss monster in the Dominion Tower minigame after completing Shadow of the Storm. An alternate universe version of him also features as a boss in Dimension of Disaster: Demon Slayer, where he is stronger and possesses different mechanics. 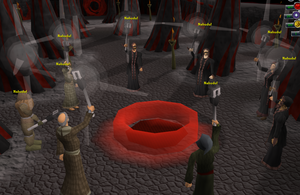 Agrith Naar likely came to Gielinor during the Second or Third Age, following Guthix's descent into slumber. According to Juna, Agrith Naar actively fought for Zamorak during the God Wars, ultimately forcing Guthix to banish him from Gielinor when the Fourth Age began.[2] Still hoping to gain power in Gielinor, Agrith Naar found a loophole in his banishment, and managed to control natural disasters from within one of the Infernal Dimensions without being physically present in Gielinor.[1] 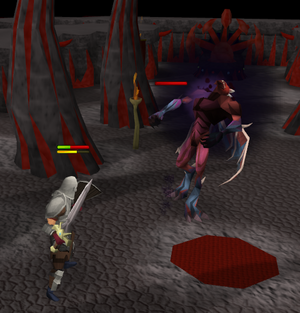 Agrith Naar is slain with Silverlight.

According to Ellemar, Agrith Naar would not be able to wreak havoc on Gielinor if he was removed from his own dimension.[3] A group of Saradominist priests then summoned him to Gielinor and ultimately capsuled him into a human body.[4][5] Even this was not enough to completely limit his power; during the Demon Slayer quest, as Denath, Agrith Naar summons fellow demon Delrith outside of Varrock. [6]

In Shadow of the Storm, Agrith Naar is summoned by the player using the metaphysically weakened dimensional pocket beneath Uzer, where Thammaron entered the city during the Battle of Uzer between Years 3,000 and 4,000 of the Third Age. Agrith Naar is ultimately slain by the player, and his blood stains Silverlight, turning it into Darklight.

With level 50 or higher combat stats, it will be quite easy to defeat him, particularly if the player brings decent food such as lobsters or better. He has no weakness, but melee is recommended because the final blow must be dealt with Silverlight. Any rune or stronger weapon can be used, although Silverlight will suffice.

Agrith Naar attacks with melee or Magic. If the player uses Protect from Melee or Protect from Magic, he only uses the style the player is vulnerable to. If the player stands out of range and prays against his magic attacks, he doesn't advance to use melee and no melee damage will be taken. However, he will occasionally use a spell that looks like Telekinetic Grab which teleports the player right next to him. He can be killed only with the use of Silverlight, which then is stained with ichor, becoming Darklight. As with all demons, he is weakened by the effects of Silverlight, and whilst fighting him, the final blow must be dealt with Silverlight. If the final blow is delivered to Agrith Naar with a weapon other than Silverlight, he will regain exactly 95 life points.

The following takes place during Dimension of Disaster: Demon Slayer.

In this alternate realm, Agrith Naar and Delrith are not comrades, but enemies. Agrith Naar consistently picks on Delrith, which continually angers the latter as he does things such as "making it rain", which he hates.[7] Delrith finds himself trapped on Gielinor, even though he wants to escape back to Infernus.

The player goes to Delrith, who presumes them as another cultist. After hitting him with Silverlight, Delrith sees a chance to leave, but Agrith Naar uses a bolt of lightning to deflect any attacks on Delrith. Delrith presumes that he doesn't want the adventurer to kill them as he enjoys picking on him.[8] Delrith guides the player through a blood ritual, and upon completion of the ritual and being stabbed with Silverlight, returns to Infernus. He quickly banishes Agrith Naar from Infernus to New Varrock, which he mentions that he hates.[9] Angry at the player, he attacks them but is ultimately slain. Just as after Shadow of the Storm, his blood then stains Silverlight and turns it into Darklight.