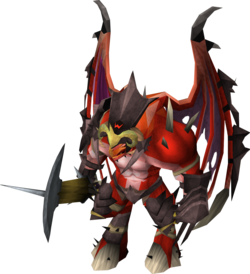 The Zamorakian butcher demon is a powerful demon that has a 25% chance of spawning in place of a regular troop during the Battle of Lumbridge. There initially couldn't be more than one in the battle at any time, but due to a glitch, multiple Zamorakian butcher demons occasionally spawned. Like all special units, they do not retaliate against players unless they are not currently under attack or are attacking any other target. They drop 3 times the amount of tears as the player's multiplier. After an update killing this demon does give combat experience.

A demon has spawned