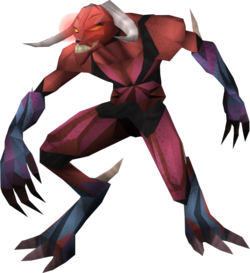 Delrith is the demon summoned to destroy Varrock originating from Infernus. In the past, he was banished by a miner, Wally, and when a gang of cultists led by Denath summons him again in 169, an adventurer dispatches him with the aid of Gideon Bede, a Saradominist scholar.

He has a combat level of 15 (42 in Dominion Tower) and appears in the crypts below the Zamorakian church in the Demon Slayer quest. He is fight-able as a class H boss monster in the Dominion Tower minigame if the player has completed Demon Slayer. A copy of Silverlight is provided within the arena.

The demon can only be attacked with Silverlight, and no other weapon or the message "I'd better wield Silverlight first" appears. 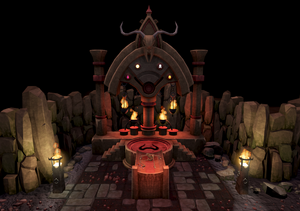 It is implied by the Demon Butler that Delrith originated from Infernus as a Demon Lord whom he served under, and in Demon Slayer.

Many years ago, the druids of Taverley had many stone circles built across Gielinor. At these sacred altars the druids would worship Guthix, the god that shaped, but not created the planet. One such circle was found just outside of Varrock, the massive capital of Misthalin. For some years it stood as a beacon to the followers of Guthix.

The circle was destined to fall, however. 150 years ago, in the year 19 of the Fifth Age, the stone circle was captured by an order of dark wizards, who, for unknown reasons, sought to destroy Varrock in Zamorak's name. It was here that they summoned Delrith although he was swiftly defeated by Wally. 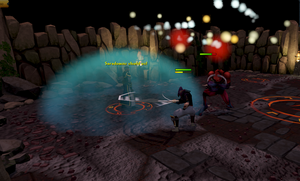 During Demon Slayer, a cult of cultists and a man named Denath prepare to summon Delrith once more in the Church of Zamorak in the southeast of Varrock by stealing a tome from the monastery near Edgeville. Gideon Bede, who had been in charge of the Monastery's library, followed Denath to Varrock where he recruits an adventurer to aid him. Once the adventurer accepts the offer to help, they begin Demon Slayer.

The following takes place during Dimension of Disaster: Demon Slayer.

In Dimension of Disaster, Delrith was successfully summoned and went on a rampage through Varrock, killing many people including Gertrude's sons Wilough and Shilop. He enjoyed terrorizing the people of Varrock until Zemouregal and his zombies invaded, and seeing how destructive and perhaps annoying he could be, Zemouregal threw him in the southeastern area of Varrock. To make matters worse for Delrith, the demon Agrith Naar began bullying him from Infernus, and he longed to return to his home realm.

The adventurer shows up and Delrith believes that they are just another "crazy cultist". After they use Silverlight on him, he realises that he has a chance to escape and enlists them to get him out of New Varrock. The adventurer gets a vial of blood, and Delrith guides them through the process of making a blood circle. The adventurer later stabs him while he mutters the incantation to return to Infernus, and upon returning back in his home world, banishes Agrith Naar to New Varrock.