From the RuneScape Wiki, the wiki for all things RuneScape
Jump to navigation Jump to search
For the slayer monsters, see Kal'gerion demon.

The Kal'Gerion are an army of Infernal demons led by Kal'Ger the Warmonger from whom their name comes. They come from an unknown plane and they were brought to Gielinor by the Mahjarrat Bilrach during his portal experiments within Daemonheim. Upon finding them, Bilrach demonstrated his power to them, which made Kal'Ger pledge his allegiance to him. Their task on Daemonheim is to protect and guard all the floors from intruders.

Although few things are known about their culture, some parts of it are revealed through the Kal'gerion Notes.

It is revealed that, under the presence of a superior, a Kal'Gerion will offer them a body part of another Kal'Gerion they slew in combat as a tribute.

All of the named Kal'Gerion have a title corresponding to their powers or a special trait, Kal'Ger has "The Warmonger" meaning "who sells war", Yk'Lagor has "The Thunderous" because of his violent roars and the sound of the earth cracking when he punches the ground, Bal'Lak has "The Pummeller" because he literally pummels everything with his warhammers, Har'Lakk has "The Riftsplitter" for his control over portals and To'Kash has "The Bloodchiller" for his control over ice and moisture. 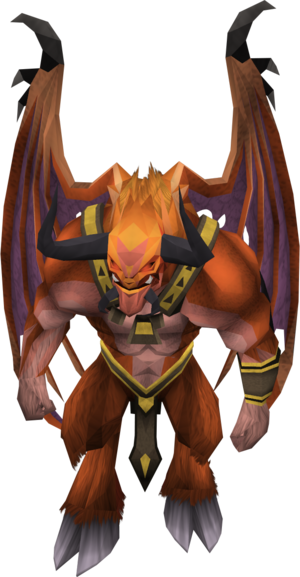 The Kal'Gerion are a fierce and powerful race, they have magical properties and are known to have a great control over different types of magic since all of the Kal'Gerion found within Daemonheim can and will attack with magic of all sorts. Not all the demons are as specialised in magic, some demons prefer to use brute strength and close combat to demonstrate not only their skills but also their power.

When Bilrach opened the portal to the Kal'Gerion realm, Kal'Ger sent forth several dozens of demons to slaughter the "trespassers". They were able to crush ten rammernauts at a time, as with forgotten warriors and forgotten mages. Yk'Lagor showed his incredible strength, lifting a bulwark beast and playing with it in the air.

Essentially the Kal'Gerion are an army; they consist of:

There are also Black, Greater, and Lesser demons who constantly fight for the lower ranks.

Yor'Ger the Deceiver is also a Kal'Gerion demon, though his relationship to Kal'Ger is unknown. Yor'Ger allied himself with The Ambassador after their plans to release the "hundred-handed one" from Daemonheim failed due to the Guthixians.

Mod Mark in a Q&A