From the RuneScape Wiki, the wiki for all things RuneScape
Jump to navigation Jump to search
For the standard variant, see Lesser demon. 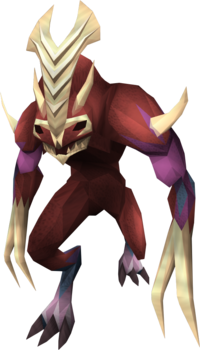 Lesser demons are monsters found in Daemonheim, on the occult and warped floors. Unlike the lesser demons that dwell on the surface, these monsters are capable of using melee in addition to a different variant of magic attacks. They are fairly strong and accurate for their level, with a weakness to arrows.

Higher levelled Lesser demons have a powerful melee attack that is usually accurate. If players get close it will use its melee attack much more often then its magic attack, which it only uses once before reverting back to melee attacks.