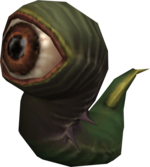 King spawns are summoned during the fight with the Penance King in final wave of Barbarian Assault hard mode. They will chase after players, attempting to reach them. If they touch a player, they will explode and deal 25% of the player's maximum health as soft typeless damage in a 3x3 area. They also explode when they are killed, dealing the same amount of damage. They will eventually explode on their own if not killed quickly enough.

Due to their high explosion damage and very low health, it is recommended for players to take them out at range. When doing so, they should be mindful of any teammates near the spawn. Resonance will block but not heal from their explosion.