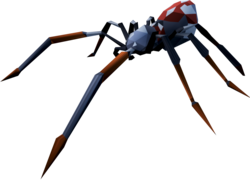 A night spider is a poisonous Slayer monster found in Daemonheim on any floor. It requires level 41 Slayer to harm. It is possible to find up to four of these spiders in one room, but this is very rare. They are usually found in "bonus" rooms of a dungeon (rooms not required to complete a floor). The poison from this monster is relatively low, with a max of 22, so antipoison is not recommended for them, but instead for the high-levelled dungeon spiders.

This spider has a unique drop, the shadow silk hood, which makes the wearer invisible to many humanoid non-mage enemies until attacked. It can only be picked up by the player who did the most damage to the spider for 30 seconds after dropping, after which it can be picked up by anybody. Due to the rarity and usefulness of the hood, it is recommended to bind it if obtained.

The spider's spawn rate is affected by the Slayer level(s) of the party member(s), being more likely to appear with higher Slayer levels. It is also more likely to spawn on the second set of abandoned floors (floors 30-35), as well as larger floors due to the greater number of rooms. Hood seekers should therefore try floors 30-35 large with high-levelled slayers to maximise their chances of spawning a night spider.

It does not count as a spider for Slayer assignments.