The Basilisk boss is an especially strong basilisk that can only be fought once, during the Desert Slayer Dungeon miniquest. 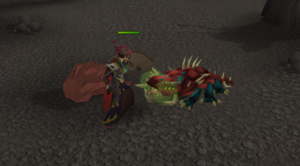 The recommended strategy for fighting the basilisk boss is to use melee combat; the basilisk is weak to stab attacks, so the use of a one-handed stabbing weapon, such as the chaotic rapier or Korasi's sword, is recommended. Spears and other two-handed weapons are not recommended unless the player has a Mask of Reflection, as a mirror shield must be wielded to avoid the basilisk's effects.

Even with the use of prayers, each of its attacks still reduces one or two combat stats by one to three points.  A super restore or restore potion is very useful, although it is possible to replace them with combat potion or super attack and super strength potions or alternatively, placing a dominion banner will occasionally boost and restore stats.

This information has been compiled as part of the update history project. Some updates may not be included - see here for how to help out!
Retrieved from ‘https://runescape.wiki/w/Basilisk_boss?oldid=35637164’
Categories:
Hidden categories: