From the RuneScape Wiki, the wiki for all things RuneScape
Jump to: navigation, search
Not to be confused with Abomination. 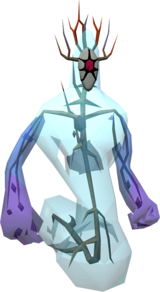 The Gelatinous Abominations are a species of monster introduced with the Troll Warzone, said to be created by the troll, Magic Stick. They are given as a low level Slayer assignment and can be found in the Taverley Slayer Dungeon in Ewean's Grove, just south of Taverley's stone circle. Spiked gauntlets, available to buy for 6gp from any Slayer master, are required in order to kill them. Turael offers Spiked gauntlets free of charge. The gauntlets must be worn, not just in inventory.

A player finishing off a Gelatinous Abomination with Spiked gauntlets.

The average Gelatinous abomination kill is worth 752.18 coins.

The update history project is a work-in-progress – not all updates to this topic may be covered below. See here for how to help out!
Retrieved from ‘https://runescape.wiki/w/Gelatinous_abomination?oldid=33850910’
Categories:
Hidden categories: