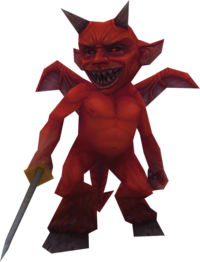 Those found in the main factory are non-attackable and may only be talked to, while those found within the Jadinko caves may be fought for Jadinko eggs and a variety of other drops similar to drops of regular Imps.

After Vyvyan is given his Jadinko pet, most of them depart the warren at his request, although the combative ones remain.