From the RuneScape Wiki, the wiki for all things RuneScape
Jump to: navigation, search
This article is about the cooked version. For the raw version, see Raw heim crab.
Heim crab? (edit) 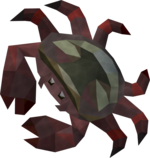 The heim crab is a tier 1 food used in the Dungeoneering skill. It heals 200 life points in both free-to-play and members. They are also used as a secondary ingredient in creating level 9 cub skinweaver pouches.

A cooked heim crab can either be found on the table at the start or by killing monsters in the dungeon and receiving it as a drop. A raw heim crab can be bought from the Smuggler.

Other crabs in Daemonheim include the members only tier 9 blue crab, healing 1600 Life Points and the tier 6 web snipper, which heals 1000 life points.

While progressing through a dungeon and if hurt, it is best to consume the heim crabs first as they take up valuable inventory space but only heal 200 life points. This allows other, higher-healing fish to be put into the inventory. Many high level players do not take these off the starting table because they consider the 200 life points it heals too insignificant to bother picking up (it heals about 2% of the life points of a player that has 99 Constitution). Alternatively, they can be sold to the Smuggler for 72 coins, but are of very little use in a boss fight. The Jagex mods like to make jokes about heim crabs just like they do with cabbages.