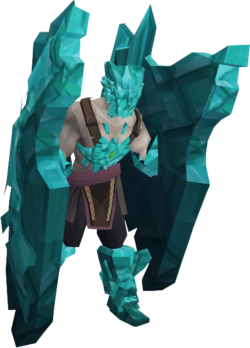 Scutarii are slayer creatures, requiring 81 Slayer to kill. Described as a 'shielder', it is a member of the Order of Ascension.

These monsters are found in the Monastery of Ascension, located in the Feldip Hills just west of the Oo'glog lodestone, along with gladii, capsarii and rorarii.

They also feature in Nomad's Elegy together with the other Ascension creatures.

The arms of the Scutarii have been heavily warped, with each one forming one "half" of a shield, and they always keep the shield in front of them. The unusually dense crystal also causes all combat damage dealt by the player to be reduced by 90%. Only familiar , poison and the Bombardment ability deals full damage when attacking a Scutarii head-on. Full damage is only dealt when a Scutarii is attacked from behind (and within 45 degrees behind them).

When stunned, Scutarii become permanently bound onto the spot they were in. They'll also be facing the direction they were looking at when stunned for roughly 10 seconds, after which they will turn around as normal. Though Scutarii appear to be fairly weak, their defence is effectively higher than the Legiones, due to their affinity value being lower than theirs. As such, it's generally not recommended to kill them without tier 90 or higher weaponry, as tier 80 can miss fairly often, even when boosted. With the correct weapons, a slayer task, a ranging boost and Anguish, 100% accuracy can be achieved.

Scutarii are often found in pairs, though there are occasional outliers of a single spawn scattered around the dungeon, and most of them are typically found near Capsarii. There are a few lone exceptions to this, with three Scutarii outside Legio Primus' chamber and five in the agility section of the dungeon, which are free of other members. There is also a group of four right outside the laboratories of Legio Quartus, Legio Quintus and Legio Sextus, albeit with one Capsarii spawn between them.