Killing the kurask overlord requires level 70 Slayer and rewards the player with 1,000 Slayer experience. Contrary to popular belief, killing this boss while having the regular version assigned, does not give more Slayer experience: 1,000 experience is the maximum. However, if the player's current task is kurasks, then the 15% combat bonus of the (full) slayer helmet, black mask, hexcrest and focus sight is in effect, as well as the kurask overlord counting toward the task. 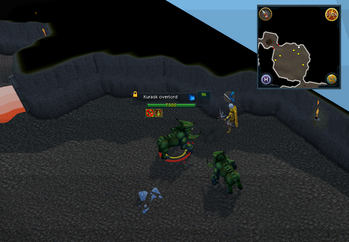 A player safespotting the overlord.

This information has been compiled as part of the update history project. Some updates may not be included - see here for how to help out!
Retrieved from ‘https://runescape.wiki/w/Kurask_overlord?oldid=35683872’
Categories:
Hidden categories: