From the RuneScape Wiki, the wiki for all things RuneScape
Jump to navigation Jump to search
Ocellus? (edit)? (edit) 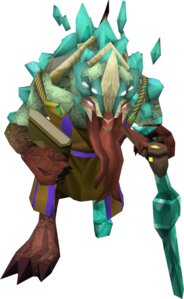 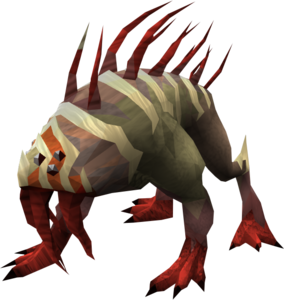 Ocellus is a somewhat insane Virius and Guardian of Guthix.[1] He stands guard outside the Monastery of Ascension, trying to stop the Order of Ascension, an order he created that went rogue and are attempting to create a new Guthix for them to worship. Ocellus tried to confront them but, after failing to stop them, he trapped them inside their monastery and stands guard to ensure they do not escape.

Ocellus and blood reavers are the only examples of the virii, a type of chthonian demon. He used to be Zaros' pet virius in the Second Age, along with his brother Auriculus.

Ocellus can make the ascension crossbow and also sells algarum thread, which is required to make the level 90 Sirenic armour. 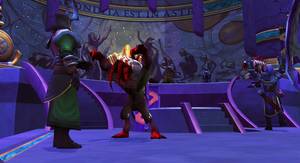 Ocellus and his brother fighting Zemouregal and Hazeel during the betrayal of Zaros.

Like all Virii, Ocellus and his brother Auriculus originate from the world of Infernus, otherwise known as the Infernal Dimensions. Being a virius, he was presumably originally of intelligence similar to that of a dog and other similar pack animals. At some point during or prior to the Second Age, Zaros travelled to Infernus and tricked Hostilius - a large chthonian demon and ruler of Infernus - into signing a pact that gave him control of twelve legions of demons. Ocellus and his brother were adopted by Zaros, and became his pets, where Ocellus fought Zemouregal during Zamorak's betrayal.

Ocellus's activities during the God Wars are unknown. Ocellus was somehow able to survive during this time (although his brother wasn't so fortunate), and was met by Guthix, who for reasons unknown, blessed him, turning him into a Guardian of Guthix, granting him increased intelligence over his own kind, including the ability to speak. Ocellus was initially tasked with guarding Guthix as he cast the gods out of Gielinor, before this role was taken over by Cres as he went to slumber. After Guthix's departure, he was one of the few to know and understand his wish of not being worshipped. He was not given a particular task, however.[1] Hoping to fulfil Guthix's wish of not being worshipped, he set out to create humans who would be free and not worship any gods and founded The Order of Ascension. After failing many times, as each new generation ignored his wishes and worshipped either Guthix or himself, he tried to make new species. This also failed.

Ocellus soon went hunting for Runestones to help in his research, also visiting Juna soon after to collect the Tears of Guthix hoping to use them for further research. Juna denied him access to the tears, no longer agreeing with his plans, so he stole the tears from her instead. Using the tears with the runestones, he created crystals. He soon created the Legiones out of crystals, gifting them with more intelligence and better understanding. In an unknown incident, he caught the Legiones leading a prayer to Guthix, and he tried to punish them; the Legiones resisted. Ocellus reminded them that it was not what Guthix would have wanted, and there didn't appear to be any further incidents afterward, suggesting that he was finally able fulfil Guthix's wish of not being worshipped. 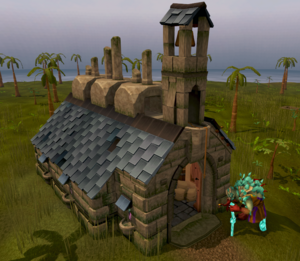 Ocellus stands guard outside of the Monastery of Ascension.

In year 169 of the Fifth Age, Guthix was killed by Sliske, despite the presence of the other Guardians of Guthix who were attempting to protect him. When asked why he wasn't with the other Guardians Ocellus states he had important work to do, and that Guthix needed work, not bodyguards. However, his journal reveals that he wasn't even asked to join the other guardians, likely because they didn't trust/like him. [1]

Soon after the assassination, his own order went rogue, and started to experiment on people. They hoped to find a way to create a new god of balance. Although Ocellus admired their effort, he knew that it was not what Guthix would have wanted, and confronted the Legiones once more, only to be defeated. He now guards the Monastery of Ascension so none of them can escape and continue their experiments. Ocellus now claims to realise that trying to stop mortals from worshipping gods is futile, and thus plans to try and make them worship him instead.

Ocellus later learned that the Order tried to create new armour, and stole the thread they were using to sew them, selling them to adventurers who would have a use for it. Although he still maintained a watch outside the monastery, a group of Ascended led by Legio Septimus were able to escape, though it was likely that Nomad used teleportation magic to smuggle them out of the monastery.

Transcripts Ocellus is the author or co-author of: 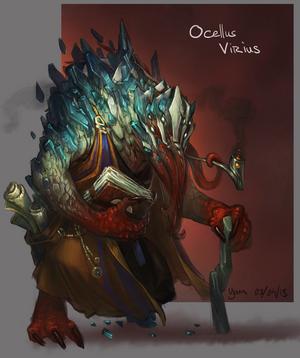